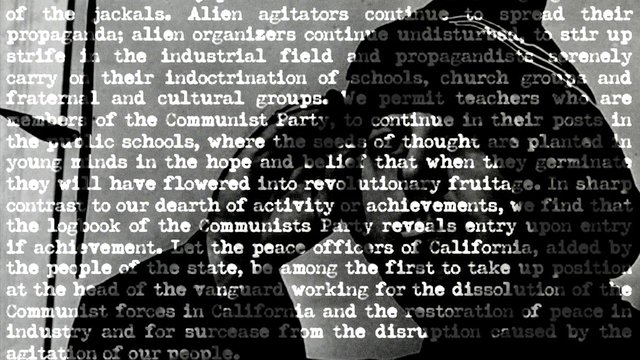 The 70-minute film, which had its world premiere at the International Film Festival of Marseilles (France) in July, examines activities of the Red Squad—anti-radical divisions of police departments across the country during the early 20th Century—in Los Angeles.

Nicolas Féodoroff, a member of the International Film Festival of Marseilles selection committee, describes the film:

The opening, Los Angeles today, at dusk. In this first installment of a series about the police in the United States, Travis Wilkerson seeks to trace the early activities of the Red Squad section of the municipal police, under the zealous tutelage of its figurehead in the 1920s and 30s, William “Red” Hynes. Of him, we only see a face and a gesture, revolver pointed at the person photographing him. His mission? To track down, flush out and threaten communist activists. Infiltration and intimidation were the lot of this political militia purposely created to break any hint of social or political subversion. Combining sketches of today’s struggle and those of yesteryear with a detailed summary of repression which then runs throughout the film, a veil covering the images of the present, Wilkerson creates a superimposition that is as metaphorical as it is real. While the methods have changed, the determined rumbling of today’s demonstrators, heard off camera, nevertheless meets the throbbing roar of flying helicopters. With contemporary Los Angeles featured as a backdrop marked by the effects of this policy in its current configuration, a gridded city, segmented by fences, walls and ubiquitous barbed wire, history seems to be repeating itself.

In addition to conducting the research for the film, Wilkerson also shot, edited, narrated, recorded sound and cast the project on a low-budget. Read about Wilkerson’s low-budget strategy.

Wilkerson generally works in the film tradition of the Latin American Third Cinema, which eschews the capitalist system and the traditional Hollywood film model.

Above is a trailer for Los Angeles Red Squad.