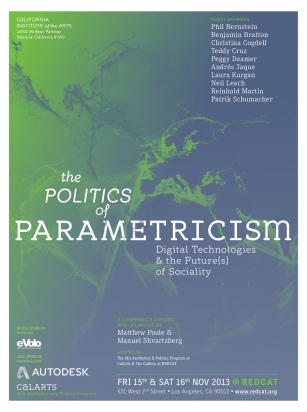 On Nov. 15 and 16, high-profile thinkers in the fields of architecture and urban design gather for The Politics of Parametricism: Digital Technologies and the Future(s) of Sociality, a two-day conference at REDCAT. Presented by the MA Aesthetics and Politics Program at CalArts, the event aims to discuss the role of politics in architecture, particularly in parametricism, the next “grand style” in the history of architectural movements.

The approach that this conference will take is to try to explore the points of convergence of the critical discourses of Parametricism and its practical innovations within its industries. We propose to explore the foundational impulses and methods/mechanisms of such practices and discourses by rethinking sociality as a form of collective technology: i.e. social formations and transformations considered as tacit design processes rather than as natural evolutionary processes.

Whether as tools for democratic action or tyrannical spectacle; self- and community-building capabilities; a post-humanistic subject; or, the mediatized politics of our various futurisms—all these themes are figured within the Parametricist discourse.

The two-day event is a continuation of the program’s cognitive capitalism conference last fall and is an opportunity to think about how digital technology is changing social relations today. According to director of the MA Aesthetics and Politics Program Arne De Boever:

For us, this is a key issue at the crossroads of aesthetics (sensing, feeling, perceiving) and politics (doing). Last year, we organized a conference around the pathologies produced by digital culture: addiction, depression, burnout, attention deficit disorder, etc. This year, and partly in coordination with the new Interventions Lecture Series in the School of Critical Studies, we are trying to think about the social and political ramifications of the use of digital technology in architecture, the theory and practice of designing the worlds in which we live. What we’re trying to develop, in the time of social media and MOOCs, is a critical digital culture that is deeply aware of both the digital’s opportunities and its tremendous risks.

The Politics of Parametricism is organized by Matthew Poole and CalArts alumnus Manuel Shvartzberg (MA Aesthetics and Politics 13) in collaboration with philosopher Bernard Stiegler.

Below is the full schedule:

10 am to 12 noon, Panel 1: Introduction to Parametricism: historical and technological context

2 to 4 pm, Panel 2: Parametricism, the commons and social representation

**Update: The MA Aesthetics and Politics and Program at CalArts will livestream The Politics of Parametricism: Digital Technologies and the Future(s) of Sociality here.

The Politics of Parametricism: Digital Technologies and the Future(s) of Sociality