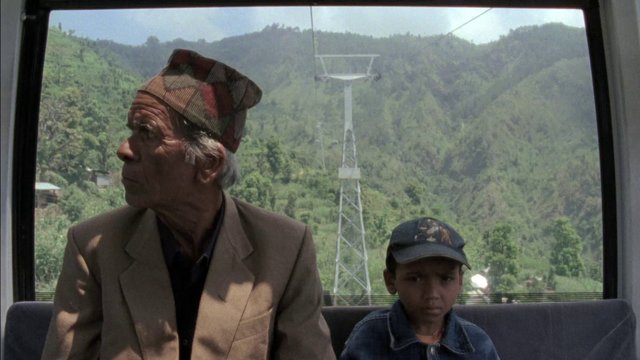 Chilean-born filmmaker and CalArts alumnus Roberto “Pacho” Velez’s (Film/Video MFA 10) debut feature, Manakamana, has been making its rounds on the 2013 film festival circuit and screens at the AFI Festival in Los Angeles this week.

The film, which he co-directed with Stephanie Spray, focuses on a cable car system high in the mountains of Nepal ferrying passengers to and from a temple of a sacred Hindu goddess.

Manakamana was filmed inside a 5-by-5-foot  cable car, with each of its 11 shots lasting as long as a one-way ride to the top—the length of time corresponding to the duration of a roll of 16 millimeter film. Andréa Picard of the Toronto Film Festival writes:

Though the film’s concept is appealingly simple, the effect is evocatively rich — both in the awesome grandeur of nature as seen through the car windows, and in the contradictions of contemporary Nepalese life propelled by modernization. A palpable sense of melancholia emerges as ancient traditions and cultural memory teeter on the verge of vanishing.

With its gliding, to-and-fro rhythms, exquisite sound design, and the close proximity of a shared ride, the film creates both a powerful, present tense intimacy and a strange sense of the mythic. MANAKAMANA boldly extends the ambitions of transcendental cinema by focusing on the melding of the sacred and the profane in everyday life. From the fixity of one’s seat and an impressively elevated vantage point, even the vertigo-stricken can sit back and enjoy one of the world’s most spectacular views.

Read more about the film in a review from Chief Film Critic Scott Foundas of Variety and watch the trailer above.