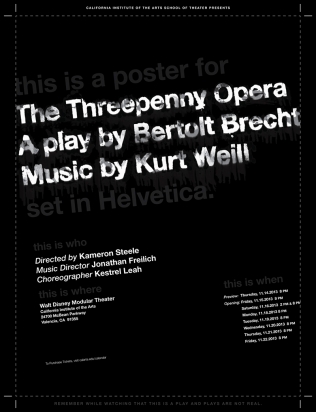 The CalArts School of Theater presents eight performances of playwright Bertolt Brecht and composer Kurt Weill’s musical The Threepenny Opera at the Modular Theater from Nov. 15 through 22.

Based on British author John Gay’s The Beggar’s Opera, the musical follows the trials of the anti-hero Macheath as he tries to marry Polly Peachum. Polly’s father, Jonathan Jeremiah Peachum, boss of London’s beggars, disapproves of the union and schemes to get Macheath executed.

The Brecht and Weill adaptation popularized the song Mack the Knife, a murder ballad that introduces the thieving and philandering Macheath. It is now considered a standard and has been covered by jazz greats Louis Armstrong and Ella Fitzgerald, among many others.

In the news release, Steele describes the CalArts production in greater detail:

Two tiers of video projections, animation, fantastical costumes, extreme makeup and moving lights interweave with visceral performances to galvanize Brecht’s timeless assault on the status quo. Created to interrogate our notions of religion, crime, money, sex, race, love and middle-class morality, The Threepenny Opera promises to challenge our perceptions of ourselves, and the communities we live in.

Below, we posted a video of Louis Armstrong covering Mack the Knife.