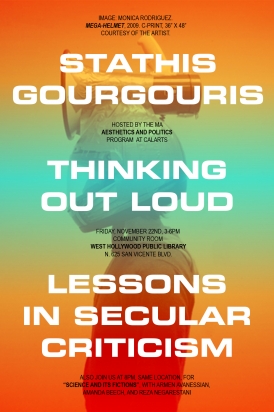 On Friday (Nov. 22), the West Hollywood Public Library hosts poet and literary theorist Stathis Gourgouris as part of its joint program with CalArts’ Aesthetics and Politics Program, the West Hollywood Aesthetics and Politics (WHAP!) Lecture Series. Gourgouris, director of the Institute for Comparative Literature and Society at Columbia University, discusses his new book, Lessons in Secular Criticism, in a lecture titled Thinking Out Loud: Lessons in Secular Criticism.

Secular criticism, a term coined by the public intellectual Edward Wadie Said, is a philosophy that counters transcendentalism, a movement that believes in the purity of the individual as self, apart from society and institutions. Gourgouris reconfigures recent secularist debate to point to secular criticism’s role in the making of radical society and how it can be a catalyst towards a society that “overturns inherited modes of subjugation, whether religious or secularist.”

From Lessons in Secular Criticism’s description:

Gourgouris’s point is to disrupt the co-dependent relation between the religious and the secular—hence, his rejection of fashionable languages of postsecularism—in order to engage in a double critique of heteronomous politics of all kinds. For him, secular criticism is a form of political being: critical, antifoundational, disobedient, anarchic, yet not negative for negation’s sake but creative of new forms of collective reflection, interrogation, and action that alter not only the current terrain of dominant politics but also the very self-conceptualization of what it means to be human.

Following Gourgouris’ lecture, School of Critical Studies dean Amanda Beech, founder of Speculative Poetics research platform Armen Avanessian and philosopher Reza Negarestani discuss aesthetics and science in Science and Its Fictions. They will talk about “how and why aesthetic adventures in literature and art capture the scientific and aspire to the status of scientific inquiry—and how, in turn, philosophical theory and cultural practices often run the risk of aestheticizing science.”

Thinking Out Loud: Lessons in Secular Criticism and Science and Its Fictions