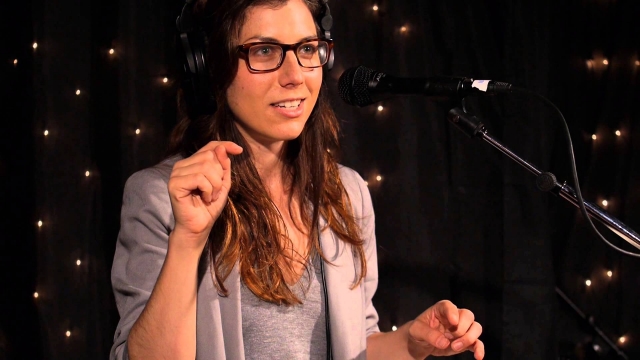 The concert will feature vocals by Holter, as well as performances by clarinetists Brian Walsh (Music MFA 08) and James Sullivan (Music MFA 03) and violinist and CalArts faculty Mark Menzies.

Holter released a program note about her piece, Memory Drew Her Portrait, via the LA Phil’s website:

Memory Drew Her Portrait is a complaint of the troubles of the heart, mind, and body in the absence of one’s lover. It is inspired by the text of medieval composer/poet Guillaume de Machaut’s Le Voir Dit (The Book of the True Poem, in the translation by R. Barton Plamer, edited by Daniel Leech-Wilkinson), a collection of letters between himself and a young lady, two lovers who rarely have a chance to see one another.

Here, we hear one side of the story—the lover waiting for his lady who may never return, and the resulting hope, paranoia, pain and delusion. The text was written first. The music was later set to the text, and was inspired a bit by both the cadence of medieval music and the fluidity and rambling of romantic harmonies.

McIntosh’s ‘Etude IV’, from his eight Symmetry Etudes for two clarinets and violin, was written in 2010. From the composer’s program note via the LA Phil’s website:

Jim Sullivan and Brian Walsh are two very good friends of mine and we have been playing music together for five or six years in various contexts. They are both phenomenal musicians and are the reason that these crazy pieces (the Symmetry Etudes) exist. They often meet with each other once a week or so to practice tuning and other kinds of technical clarinet things, and about four years ago I had the good fortune to be invited to a number of these meetings, at which we started to explore microtonal tunings. They suggested I write some kind of study or technical exercise to help with understanding just intonation, which instead turned into a set of eight complete pieces of music that took me three years to write. It is not a single piece with movements, but rather a kind of book of self-contained individual pieces—although there is a definite development throughout the book.

Above, Seattle radio station KEXP presents Holter performing live in studio on Sept. 15. Below is a short video about McIntosh’s writing for Yarn/Wire.