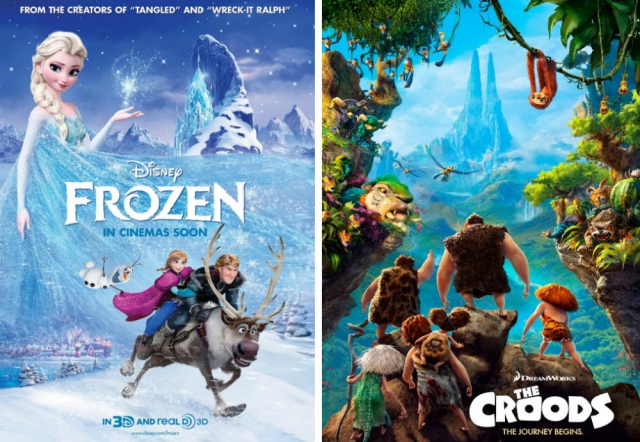 ‘Frozen’ and ‘The Croods’ were nominated for 2014 Golden Globe Awards. Both films were directed by CalArts alumni.

The 2014 Golden Globe nominations, which honor both film and television productions, were announced early this morning in Los Angeles by actors Zoe Saldana, Aziz Ansari and Olivia Wilde and members of the Hollywood Foreign Press Association.

Frozen, the animated musical set in the Scandinavian kingdom of Arendelle, was directed by alumnus Chris Buck (Film/Video 78) and Jennifer Lee. The Croods, which follows the travails and adventures of a caveman family through a fantastical world, was directed by Chris Sanders (Film/Video BFA 84) and Kirk De Micco.

Last week, Buck and Sanders were also recognized for their work on these films by the Annie Awards as they were both nominated for Directing in an Animated Feature Production.

The third film to round out the category is Universal Pictures’ Despicable Me 2.