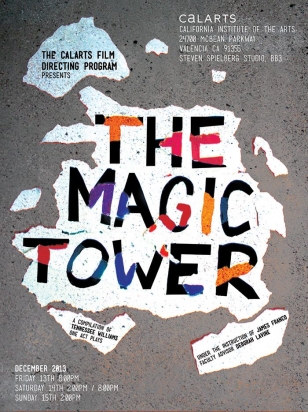 Last weekend (Dec. 13-Dec. 15), the School of Film/Video presented four performances of The Magic Tower, a compilation of one-act plays inspired by Tennessee Williams. The interdisciplinary piece, which consisted of nine short plays that incorporated live performance, film screening and dance, was the product of a class directed by faculty Deborah LaVine and visiting faculty Academy Award-nominated actor James Franco.

The Magic Tower collects some of Williams’ most iconic works, as well as early one-acts which he would later turn into full-length dramas: “The Pretty Trap,” which Williams expands into The Glass Menagerie, and “Interior: Panic,” the precursor to A Streetcar Named Desire.

The design students contributed a set that is more than just a space on which the actors perform; it is an integral aspect of the whole piece. The other designers have been able to contribute audio and visual components that make the show even more immersive. And we have added a host of amazing dancers to the huge group of awesome actors and directors.

Of Williams’ work and how it relates to his students, Franco said:

So many of his characters are dreamers who live in their imaginations. The conflicts for these characters arise when their dreams must contend with brutal reality. That’s Tennessee: Blanche DuBois in one hand and Stanley Kowalski in the other. This kind of conflict is perfect for students at art school because they live in the wonderful land of infinite possibility. But just outside the walls of CalArts, after the graduation bell tolls they will be forced to face the professional world with only their delicate art to guide them. They are all Tennessee’s, all Blanche’s, getting ready to face the big bad Stanley world.

Below, we posted a promotional video for The Magic Tower.