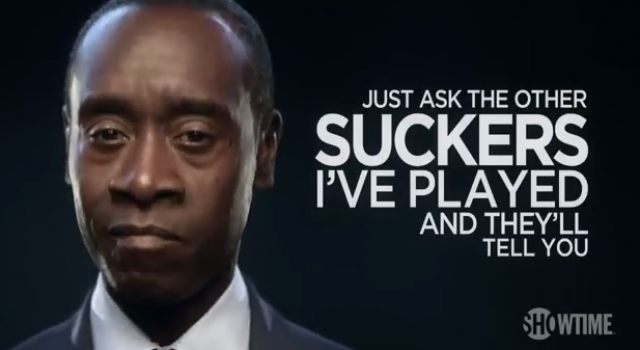 In its first two seasons, the satirical comedy has focused on a team of unscrupulous business consultants of the firm Galweather & Stearn, led by the Pied Piper-like Marty Kaan (Cheadle). His team used every dirty trick imaginable to win over CEOs and their business. After the events that unfolded last season, Kaan finds himself gainfully unemployed and is forced to fend for himself in the wilds of the freelance world.

[Kaan] has a muscular mix of assuredness and self-destructiveness, and never quite knows when or why to tell the truth, possibly because of his insanely complicated relationship with honesty. Marty balances this precarious relationship with saying—and doing—the right thing between his work life (his team of dysfunctional staff includes Kristin Bell, Ben Schwartz, and Josh Lawson) and his rapidly disintegrating home life (Glynn Turman plays his therapist dad and Donis Leonard, Jr. is his sensitive adolescent son still exploring his gender identification).

Tonight’s screening at the museum’s Bing Theater includes the first and third episodes of the new season and features series creator Matthew Carnahan and star/co-executive producer Cheadle in a post-screening discussion.

Cheadle has earned two consecutive Emmy nominations as well as Golden Globe and NAACP Image Award wins for his portrayal of Kaan in House of Lies. The series returns to Showtime for its third season on Sunday, Jan. 12 at 10 pm.