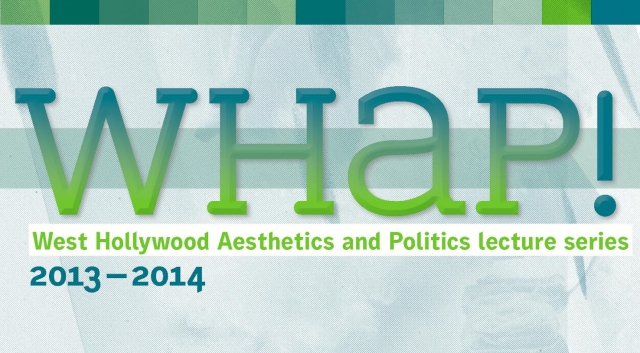 On Friday, the West Hollywood Aesthetics and Politics Lecture Series (WHAP!) presents its first guest speaker of 2014, philosopher Santiago Zabala, at the West Hollywood Public Library Common Room. Hosted by the School of Critical Studies’ Aesthetics & Politics MA Program, the author conducts a workshop, Critical Theory and Eurocentrism, from 3-6 pm followed by a talk, Only Art Can Save Us: The Emergency of Aesthetics, at 8 pm.

Zabala, who teaches contemporary philosophy at the Department of History of Philosophy, Aesthetics and Cultural Philosophy at the University of Barcelona, releases his book Only Art Can Save Us: The Emergency of Aesthetics (Columbia University Press) later this year. In a related 2012 article written for Al Jazeera, Zabala elaborates on the book’s title: “The world needs creative interpretations of global issues, not better descriptions of things people are accustomed to.”

The evening lecture also features artist and co-director of the Program in Photography and Media at CalArts, Ashley Hunt, serving as respondent to Zabala. Hunt’s work engages social movements, modes of learning and public discourse.

In addition to Al Jazeera, Zabala also writes op-eds, essays, and reviews for The New York Times, The Guardian and other publications. If you plan to attend the afternoon workshop, Zabala suggests that you read the following in advance:

He also recommends these short texts related to his evening lecture: