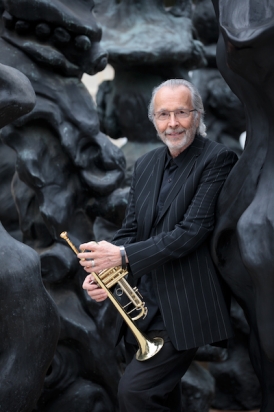 Musician, artist and philanthropist Herb Alpert has been named this year’s recipient of the 2014 REDCAT Award. Alpert will receive the award at the annual CalArts’ REDCAT Gala on March 15 at REDCAT (Roy and Edna Disney/CalArts Theater) in Downtown Los Angeles.

Steven D. Lavine, president of CalArts, describes Alpert as “a legendary artist and visionary who brings much the same generosity of spirit and depth of his creativity to his philanthropy.”

Alpert—the namesake of the Institute’s music school—also established the Herb Alpert Award in the Arts in 1994. The unrestricted prize of $75,000 each for five risk-taking, mid-career artists working in the fields of dance, film/video, music, theatre and the visual arts. CalArts has been administering the prize since 1994; Herb Alpert Award winners visit campus and work with students in week-long residencies. “[The Herb Alpert Award] is just one example of his thoughtful support for arts and culture, including CalArts,” Lavine says.

Alpert’s illustrious artistic career took off in the late 1950s after composing “Wonderful World” with Sam Cooke and Lou Adler. In 1962, Alpert went on to co-founded A&M Records with Jerry Moss, which grew into the largest independent record label in history.

More than five decades later, there’s no slowing the multi-hyphenate Alpert down. In 2013, he was presented the National Medal of Arts at the White House by President Barack Obama, and, at the Grammy Awards in January, he picked up his ninth Grammy Award for Steppin’ Out—the Best Pop Instrumental Album.

The CalArts’ REDCAT Gala will also include a special performance by Alpert and his wife, Grammy award-winning singer Lani Hall. She’s featured on the track (and video) of “Puttin’ on the Ritz” from Steppin’ Out:

The Master of Ceremonies for the gala will be Emmy Award-winning actor James Cromwell (American Horror Story, LA Confidential, Babe), an active supporter of Los Angeles theater and REDCAT. The co-chairs for the event are Maria Arena Bell, Neda and Tim Disney, Jamie and Michael Lynton, and Malissa and Bobby Shriver.