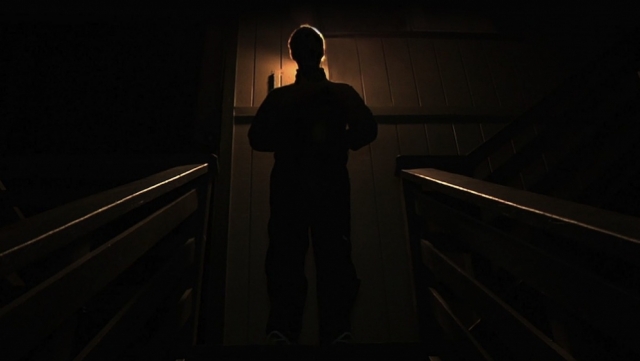 Patrick Brice, known as Donat Patrick Kack-Brice (Film/Video BFA 2011) while attending CalArts, premieres his first narrative feature film, Creep, at South By Southwest (SXSW) on Saturday (March 8).  The 80-minute film, which focuses on the “intense and chilling interplay between its two protagonists,” screens at 9:30 pm at the Stateside Theater in Austin.

Brice also stars in the suspense/thriller. Here’s the synopsis from SXSW:

$1,000 for the day. Filming service. Discretion is appreciated.

Low on cash and full of naiveté he drives to a cabin in a remote mountain town where he meets Josef (Mark Duplass), his cinematic subject for the day. Josef is sincere and the project seems heartfelt, so Aaron begins to film. But as the day goes on, it becomes clear that Josef may not be who he says.

The low-budget project was made by a skeleton crew, including Brice and actor/producer Duplass (from Safety Not Guaranteed), with editor/producer Chris Donlon joining them in post-production.

“It was an intense, intimate and freeing process—by far the most collaborative project I’ve experienced in my life,” Brice tells SXSW blogger Jim Kolmar in an interview.