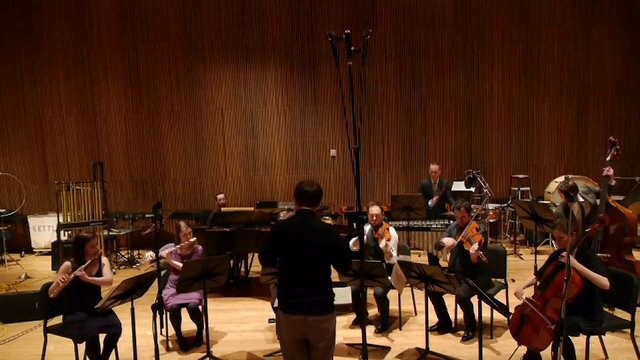 The 2013 Herb Alpert Award in Music winner Alex Mincek has been in residence at CalArts this week, working individually with composition and performance students from The Herb Alpert School of Music. The lauded New York composer and saxophonist’s own pieces will be performed by CalArts faculty, alumni and students in a concert tonight (March 7) at 8 pm at the Wild Beast.

People describe pieces from his Pendulum series as sounding either mechanical or organic. “Is it striated or is it smooth? It’s kind of the poetic swinging of the pendulum, if you will, of those two poles. People interpret it as either a very continuous and seamless versus very mechanical and disjunct sort of sound.”

“All of the pieces on the program have a fascination with texture and timbre, rhythmic vitality and austere repetition,” says Mincek.  He adds that Donegal is an orchestration of Flutter, a piece that investigates the “fuzzy yarn-like textures” produced by the cello. “Donegal is a county in Ireland that was famous for producing a certain weave of wool. The weave has a very distinct tactile feel and look to it,” he says. The piece exemplifies one of the themes that runs through Mincek’s music, which is translating visual surface textures into sonic textures.

Below is a score excerpt from Mincek’s Donegal: 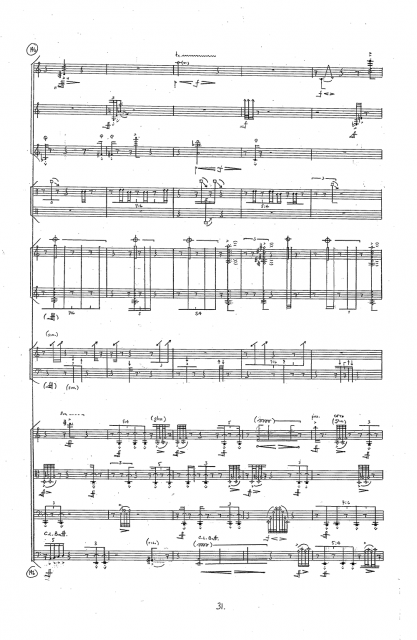 When asked how his Herb Alpert Award has contributed to his practice, Mincek replied that he’s set aside some of his teaching obligations so he can commit more time to performing with his ensemble, Wet Ink Ensemble. He is also traveling and saying “yes” to more composition projects–and his composition plate is very full. He is currently writing a piece for large orchestra, Pendulum X, during the next three months, a new piece for Wet Ink that is due in April, as well as a piece for string quartet and orchestra to be performed by the Jack Quartet and American Composers Orchestra next year.

Mincek also discussed the direction of the new work. “In the past, I’ve been using the physical capabilities of the saxophone in malfunction mode to generate material. But now I’m also combining more abstract and theoretical material like just intonation or various ways of thinking about acoustics to find where these worlds intersect.”

Above, the Wet Ink Ensemble performs Alex Mincek’s Pendulum VII at the DiMenna Center in New York City on Feb 8, 2013.

Watch an interview with Mincek via the Herb Alpert Awards Vimeo.