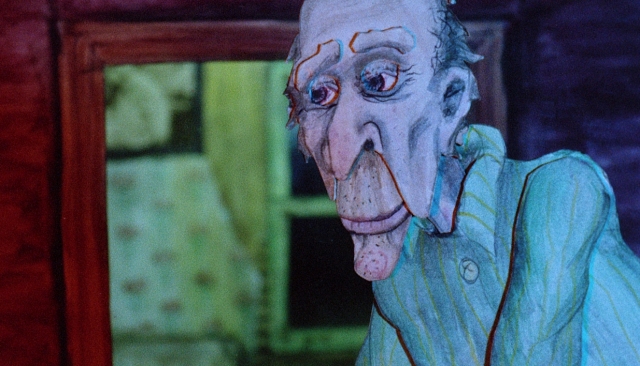 Filmmaker, artist, animator and educator Chris Sullivan is an artist-in-residence this week in the CalArts’ Experimental Animation Program. In addition to consulting with School of Film/Video students on their projects and leading technical workshops, Sullivan will also screen several films, including a slate of student films from the School of the Art Institute of Chicago, where he’s currently on faculty in the Film, Video, New Media and Animation Department.

However, on Tuesday night (March 11), the focus is squarely on Sullivan’s own work as the School of Film/Video’s Structuring Strategies class screens his 130-minute feature-length animation, Consuming Spirits.

The 16-mm film, which Sullivan describes as a “psychological drama, created frame-by-frame with multi-plane cutout animation and drawings on paper,” was 15 years in the making. Using various techniques, from cutout animation and drawing to collage and stop-motion animation, the film is a complex narrative that examines the seemingly unrelated lives of three residents: Earl Gray, Gentian Violet and Victor Blue.

After its premiere at the 2012 Tribeca Film Festival, Consuming Spirits has earned critical recognition for both its visuals and existential story elements. As a New York Times Critics’ Pick, A.O. Scott wrote:

This achingly sad, occasionally grotesque story of family secrets, sexual longings and small-town malaise, told through drawings, paper cutouts and miniature models, has more in common with intimate graphic novels like David Small’s “Stitches” or Alison Bechdel’s “Fun Home” than with any live-action indie melodrama I can think of. The wintry, northern, class-divided setting might resonate with readers of Joyce Carol Oates. But the blend of narrative quasi-realism and wild, somber visual invention in “Consuming Spirits” is entirely original….

As its title suggests, “Consuming Spirits” is both about the power of (figurative) ghosts and the literal effects of drunkenness. It weaves a complicated, intoxicating spell and sets the mind running in several directions at once, not all of them toward happy places. The fact that these realms are represented in exaggerated, often comical pictures does not make them less disturbing, but it does create a sense of enchantment that turns bad feelings inside out. This movie is sometimes a downer, but it’s also a wonder.