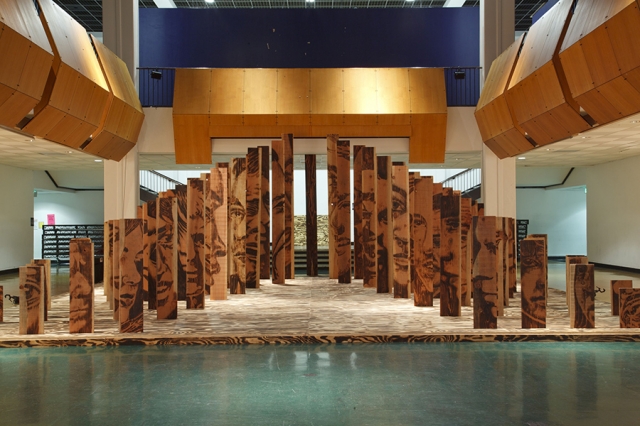 For a week last month (Feb. 1-8), the Main Gallery at CalArts featured an installation comprised of nearly 200 wood carvings bearing faces. The ambitious exhibit, titled A Forest Dark, was produced singlehandedly by CalArts student Zachary Aronson (Art BFA 14) using a process called pyrography. In pyrography, a piece of wood is decorated by applying heat to its surface. Aronson has his subjects sit for him in his studio while he draws them freehand using a blowtorch.

“Pyrography’s an immediate process, which is part of why I’m so interested in it,” he says, “The pieces constantly change at my fingertips as I draw, and yet the finished product has a sense of permanence to it.” Aronson mentions that he also practices stone carving on marble and that pyrography feels similar to that.

On Feb. 8, students from The Sharon Disney Lund School of Dance staged an eponymous dance piece, using Aronson’s work as a backdrop. The piece, based on Dante’s Inferno, also featured lighting by designers from the School of Theater.

Above, we posted a video of Aronson talking about his work and his process. Below is a slideshow of the exhibit, as well as the dance piece.