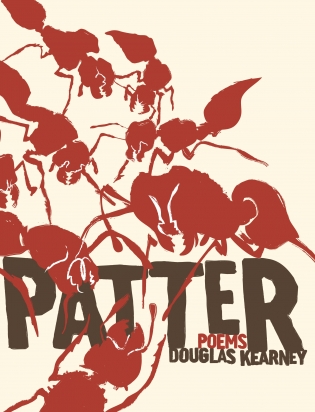 **Update: Listen to a June 15 interview with Kearney about Patter on NPR.

March 1 saw the release of Patter, the newest poetry collection from Critical Studies Faculty member, Douglas Kearney (Critical Studies MFA 04). Reduced too simply, Patter is about the struggle to conceive children, miscarriages and questions regarding the role of a man/husband in a couple beleaguered by trauma that affects the psyches of both, but only one so physically.

Kearney’s text follows in the powerful, by way of crimson, lineage of books such as Harryette Mullen’s S*PeRM**K*T, and bears itself nakedly as both an act of public contrition and declaration of resilience.

Patter is your third full-length book. Are you in a place where you feel comfortable looking back at your output as a whole?

I know there are certain things that have dogged my curiosity or remain confusing and magnetic to me, so these have stayed sites of inquiry that recur in my poems. Masculinity, cruelty, the intersection of violence and entertainment. All that being said, Patter picks up from the last line of The Black Automaton [Kearney’s second book], continuing engagement with infertility into this collection’s troubling of conception, miscarriage, birth and parenting.

The poems in Patter are split quite evenly between overtly designed graphic pieces and more traditional flush-left verse. When you began each poem, what guided your decision to compose in either form?

I do the more graphic poems when I want particular kinds of tension between messiness and clarity. The poems with performative typography are often trying to get at rhetorical/syntactic relationships without more conventional connective bits—for example, “like” or “as”—do away with textual ligaments, invite multiple voices and layers to a poem, and make the potential slippages of these ruptures an active component of the poem’s experience or inquiry.

You‘ve said your use of song lyrics is a way of “synthesizing” hip-hop‘s tradition of sampling. What about the way you utilize the written or vocalized words of others? Is that part of a musical lineage rather than a poetic one?

Typically, when I quote a song, I want there to be a sense of the lyric, the recording artist’s voice and the instrumental track barging in on the visual space of the poem. This has a musical lineage for me because of a lifetime listening to music in which such fragments are cut into songs, often by a DJ, or become the entire content of songs. Perhaps this is akin to allusion versus reference, concepts equally at home in music and literary lineages.

The title poem of Patter‘s final section places the book‘s recurring husband and wife on a reality TV program. [Kearney and his wife were featured on the OWN reality show Deliver Me.] What are your thoughts on reality TV, and specifically, what do you think are its effects on the cast members as individuals?

[My wife and I] chose to do the show; we had agency. My wife had been on bed rest from hyperemesis for most of her pregnancy, and while she was stuck with the IV, she watched the show and found it comforting and informative. But it’s strange—our home turned into a set. I became an actor acting out a discussion of one of the worst moments of my life. The distance that created felt like I had somehow cheapened that terrible event. And although we knew our case was difficult, watching the segments of the show where the doctors discuss it together, hearing the narrator build the drama—well, we sat in our family room watching the DVD and said: We didn’t know it was that bad!

Critical Studies Faculty member Michael Bryant makes an appearance as Darth Vader in one of the poems. Did Bryant create the questions in this poem, the answers?

I have a theory that Mike Bryant is a stealth muse for a lot of us writers in Critical Studies. He rewrote, by hand, Vader’s answers. My favorite bit is the scratched out part. What better way to show the Sith Lord’s inner conflict and vulnerability?