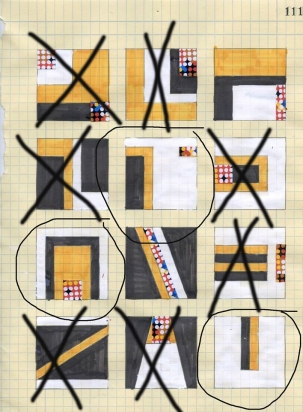 Prop sketches for ‘Emily Mast: The Least Important Things’. | Courtesy of the artist.

In The Least Important Things, Mast turned to various works of the late Catalan poet, playwright, graphic designer and visual artist Joan Brossa and adapted them to free-standing acts. Brossa’s art-making embraced incoherence, the everyday and popular forms of entertainment such as magic, cabaret and comedy routines.

For this performance, Mast worked with the Brossa Foundation in Barcelona and Los Angeles-based translator Debora Antscherl to sort, select and translate a diverse range of Brossa’s texts for live performances for the first time. These new translations are compiled in a publication designed by Mast and graphic designer Jessica Fleischmann that accompanies the show.

Audience members will view the first performance at the Los Angeles Times Central Court. From there, they will be provided with clues to direct their experience of the show. All the vignettes will be performed in intermediate spaces that reflect Mast’s and Brossa’s interest in the undefined, by 13 performers, including six CalArts alumni: James Cowan (Theater BFA 13), Loren Fenton (Theater MFA 07), Emma Zakes Green (Theater MFA 13), Kestrel Leah (Theater MFA 13), Gilbert Molina (Theater MFA 12) and Richard Pluim (Theater MFA 13).

Emily Mast: The Least Important Things is free and open to the public. It is recommended that guests wear comfortable shoes and dress warmly, as most of the performance is outdoors and will require walking and stair climbing.