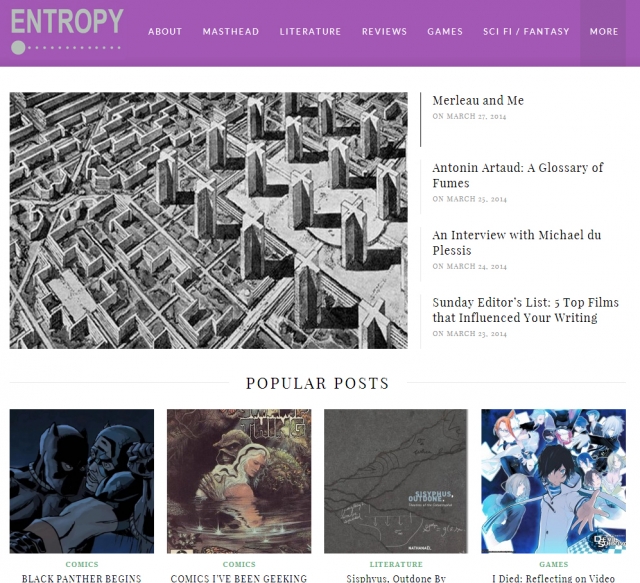 The homepage of Entropy Magazine.

Entropy, a new online magazine co-founded by CalArts faculty and alumna Janice Lee (Critical Studies MFA 08) and writer Peter Tieryas Liu, does not lend itself to the label of “literary magazine” easily. It describes itself as a “website featuring literary & non-literary content,” and counts Kotaku, The Rumpus and HTMLGiant among its influences. It’s part pop culture, part literary criticism and sometimes criticism of pop culture.

Liu explains in a welcome message:

We knew what we wanted: the orphans, the brilliant pieces on gaming, genre fiction, drama, movies and more that have a hard time finding homes. We wanted conversational reviews, one-sentence reviews, speculations on the heat death of the universe, epistemological inquiries into religion and ontology.

Entropy might have been channeling Whitman in its mania—”I am large, I contain multitudes”—and it shows in the depth and breadth of what’s already posted on the site. There are the requisite interviews, reviews and writings on the craft of writing.

Then there is a piece on the French artist Antonin Artaud’s agony by poet Will Alexander, which The Poetry Foundation’s blog Harriet, dubs “right up [its] corridor.” There’s a “100% true story” that takes place in the virtual world of an MMORPG (massively multiplayer online role-playing game). Another post analyzes the politics of adapting the Marvel superhero Black Panther for the big screen. Yet another promises to review a random video from the avant-garde video site UbuWeb every week.

True to Liu’s message, the pieces are disparate in style, topic and tone and Entropy gathers them all under its purple heading, not at all intimidated by the idea of containing multitudes.