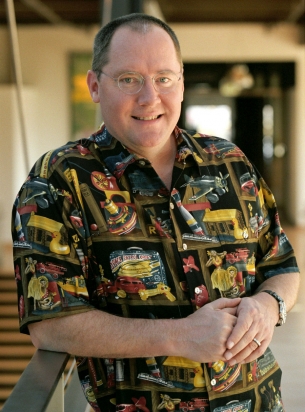 CalArts alumnus John Lasseter, chief creative officer of Walt Disney and Pixar Animation Studios and principal creative advisor of Walt Disney Imagineering, adds yet another accolade to his already-storied career on May 16th when he receives an honorary doctorate from his alma mater.

A 1979 graduate of the School of Film/Video’s Program in Character Animation, Lasseter won two Student Academy Awards for films created at CalArts: Lady and the Lamp in 1979 and Nitemare in 1980. He is the artist and executive most responsible for leading the renaissance in animated feature filmmaking known as the “Pixar Revolution.”

Lasseter currently oversees all Pixar and Disney films and associated projects, including executive producing the most recent Disney blockbuster, Frozen, which has become the top-grossing animated feature film of all time. Frozen—directed by Chris Buck (Film/Video 78), a fellow CalArts alumnus, and Jennifer Lee—also earned the Best Animated Feature Oscar® at the Academy Awards in March.

Lasseter’s own extensive filmography includes directing the groundbreaking Toy Story—for which he received a Special Achievement Oscar in 1995—as well as an Oscar nomination for Best Original Screenplay (the first time an animated feature had been recognized in that category). His other directing credits include Toy Story 2, A Bug’s Life and CARS.

As part of the inaugural class of the Character Animation program at CalArts, Lasseter and a number of his fellow pioneering animation classmates were featured in the March “Hollywood Issue” of Vanity Fair.

Of the article and his time at CalArts, Lasseter has said:

My experience at CalArts was such an awesome, special time in my life. Not only did I meet some of my best friends there, but I got to learn and work alongside some of the greatest talent in the animation industry. For CalArts and its animation program to be featured in Vanity Fair is so exciting, as the school has provided—and continues to provide—such an incredible education to so many people. I can’t wait to see the impact the next generation of CalArts alumni will have on our industry and culture.

That next generation of CalArtians will welcome back Lasseter to campus as he ushers them into the real world at the 2014 graduation ceremony.