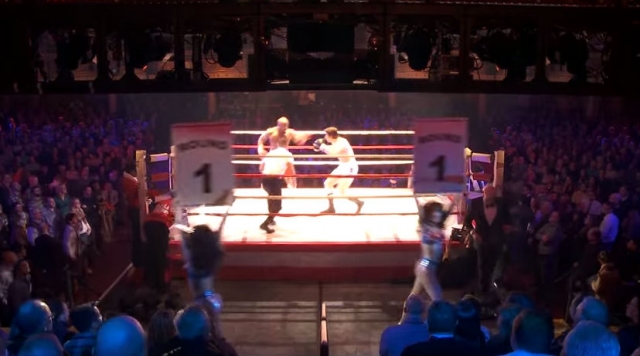 It’s been a good week for Chris Barreca, head of Scene Design at CalArts’ School of Theater.

On April 22, he earned a nomination for Outstanding Set Design from the Outer Critics Circle for Rocky, a musical adaptation of the Academy Award-winning film, currently playing at the Winter Garden Theater on Broadway. On Thursday, he received a Drama Desk Award nomination for Outstanding Set Design for the same production. And just yesterday, Barreca earned a Tony Award nomination—his first—for Best Scenic Design of a Musical, also for Rocky.

The production’s sets—with a massive, moving boxing ring as the show’s centerpiece—were already creating quite a buzz in the theater world. Even during Rocky’s preview run in February, Philadelphia magazine’s Victor Fiorillo took notice:

But the real stars of this Rocky Broadway production are found behind-the-scenes. The set design under Chris Barecca is nothing short of extraordinary, a bewildering amount of moving pieces and stunning stagecraft. I’ll leave it at that. No spoilers. But be prepared to be wowed.

In an interview with TheaterMania.com earlier this month, Barreca talked about his work and his process for turning the stage into the gritty streets of Philadelphia, and how CalArts students played a role in the show’s tech.

This arduous process, where cues are created, lights are focused, and the kinks are worked out, could take weeks, if not months, on a show as complex as this one, which has multiple locations that roll on and off stage. However, thanks to a concept called previsualization, a typically filmic function of visualizing complex scenes before shooting, the process was made slightly easier. Barreca, a professor at California Institute of the Arts, used students from the school’s world-renowned animation department to create a “moving movie” of the space. “We built up a 3D model, took the sound from the workshop, made a movie, Alex Timbers and I would sit, and we would do all of the transitions. That really saved not just an enormous amount of tech time, but it gave us creative time so we could actually imagine and experiment in a way you can’t normally do.”

Barreca has designed more than 200 productions internationally, including Broadway premieres of Marie Christine; Gabriel Garcia Marquez’s Chronicle of a Death Fortold (for which he won an American Theater Wing Award); Our Country’s Good; and Search and Destroy (for which he won a Drama-logue Award).

The winners of the Outer Critics Circle Awards will be announced on May 12. The Drama Desk Awards will be handed out on June 1 with the Tony Awards following on June 8.