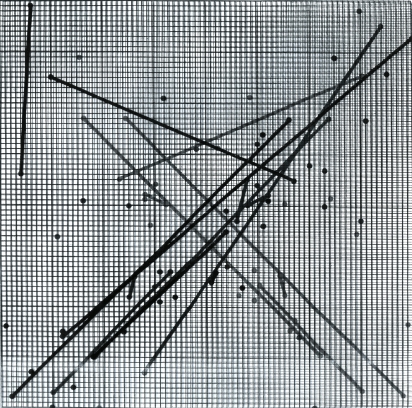 A score excerpt from Robert Ashley’s ‘in memorium.’

This Sunday (May 4) at noon, the Playing the Voice: Contemporary Vocal Techniques, Repertoire and Performance class at CalArts, led by faculty Carmina Escobar, will stage a rendition of  the late Robert Ashley’s 1963 opera in memoriam … KIT CARSON (opera) at Machine Project in Los Angeles.

Ashley, who passed away on March 3, was best known for his operas and other theatrical works.

More on Ashley’s piece in a note written by faculty member Michael Pisaro:

Written in 1963, Robert Ashley’s in memoriam … KIT CARSON (opera) is a relatively early work, but it marks a significant departure from the definition and the practice of “opera.” The score consists of six charts laid out on graph paper, meant to indicate a set of (indeterminate) actions in time [above is a excerpt from the score]. These charts should be overlapped, creating complex coordinates amongst the eight performative elements (which may be solo or grouped) of the ensemble. Significantly, time is defined as “moments” and need not refer to a clock. Actions may be disconnected or momentary, but they may also be long-term and connected. Ashley is much more concerned with developing a way of organizing action than in determining the character of those actions.

Both radical ideas of time (musical and narrative) and indeterminacy would continue to guide Ashley’s work in opera throughout his career. But this piece raises a profound question: is opera … music … nothing more than the disposition of matter in physical space in successive moments, independent of temporal coordinates? The potential incoherence of the result is perhaps an indicator of the ultimate irrationality of the world, the way in which it fails to make sense, the way in which it is truly contingent. The sequence of theatrical/operatic works by Ashley which follow this one suggest that this contingency is eventually remolded by the human faculties of emotion and memory.

Adds Escobar in an email, “I think [in memoriam] is a relevant work, not only for the far-reaching concepts about space, time and action in music or art, but also a piece that is fundamental toward generating a new performance practice in new and experimental music.

“It gives the performer the power of decision-making within a very specific set of parameters and concepts. It becomes an opera of ideas in which you can explore yourself and discover new possibilities.”

The event is free, but seating is limited. RSVP by emailing iescobar@calarts.edu or carminaescobar@gmail.com.