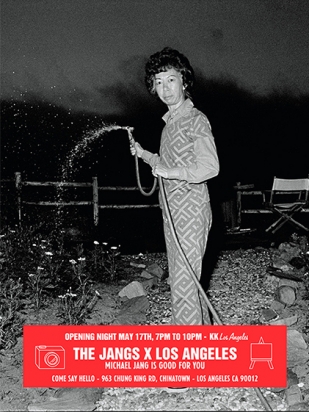 Michael Jang, a noted underground photographer and a 1973 CalArts alumnus, has made a name for himself in portrait photography, capturing images from various subcultures during the past 40 years—from celebrities such as Jimi Hendrix, Ronald Reagan and Robin Williams; to the youth of Castro’s Cuba, to gangs, rodeo cowboys, punk rockers and garage bands of the early aughts.

KesselsKramer, a boutique communications agency and art gallery in Los Angeles’ Chinatown neighborhood, opens the photography exhibition The Jangs X Los Angeles: Michael Jang is Good for You on Saturday (May 17). The exhibition—his first solo show in Los Angeles—features work from The Jangs series, which he began in 1973 while vacationing in Pacifica, California, at the home of relatives.

Jang revealed nothing of his vast & ever-expanding archive for almost forty years until 2003, when he submitted a number of images, including The Jangs, for consideration to San Franciscoʼs Museum of Modern Art, who immediately acquired several of these for their permanent collection.

Last year, Jang released College, a monograph of images from his days at CalArts. In an interview with Dazed magazine, he said that he admired the dedication of the other students, from painters to dancers, all “pursuing full days.” While his fellow photographers would spend most of their time in the darkroom, making prints for class critiques, Jang said he preferred to spend his time shooting:

To be at the same level of dedication then, as those other students, I began to have my camera with me at all times, shooting everything; college life, school dances, the local neighborhood, just like a musician practicing compositions. I learned to anticipate. And these practice images were my scales, my sketches; all done daily, and forgotten.

The book trailer for College is posted below. Jang’s exhibition at KasselsKramers opens Saturday with an artist reception from 7-10 pm. His works remain on view through June 13.

The Jangs X Los Angeles: Michael Jang is Good for You

at KesselsKramer
963 Chung King Road, Los Angeles
Opening reception: Saturday, May 17 from 7-10 pm
On view through June 13
Gallery Hours: Saturday from 12-5 pm and by appointment at all other times.