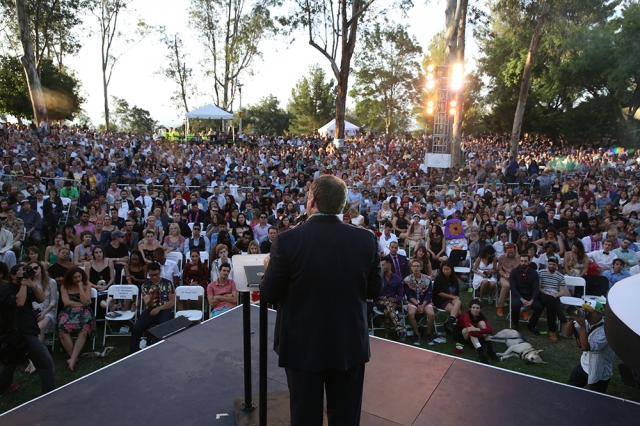 With temperatures climbing into the mid-90s on Friday (May 16), the CalArts community gathered in the Graduation Courtyard to celebrate the Class of 2014. This year, 446 artists received degrees, and CalArts paid tribute to alumnus John Lasseter (Film/Video BFA 79) with an honorary doctorate for his outstanding achievements in animated feature filmmaking.

Lasseter, who is chief creative officer of Walt Disney and Pixar Animation Studios and principal creative advisor of Walt Disney Imagineering, spoke to the graduating class in an 18-minute speech, sharing two simple pieces of advice: stay true to your artistic voice, and seek the help of others.

“Your voice is worthwhile. Have faith in it. It’s so important to create in your own voice… to hold on to what makes you unique and have faith in your vision,” said Lasseter.

Lasseter spoke about the value of cooperating with others, relating how he and his fellow students bounced ideas back and forth even while each was working on their own student films: “You need others. Too often people think that being unique means being isolated, and being a great artist means coming up with genius ideas out of nowhere. Nothing could be farther from the truth.”

In CalArts President Steven Lavine’s introduction to Lasseter, he said, “John’s remarkable career exemplifies CalArts’ experimental ethos and creative spirit. Since graduating from the Character Animation Program in 1979.” From the degree citation: “John has brought joy to millions of people throughout the world. As an artist and executive, John is responsible for creating many of the world’s best-loved and most successful films.”

Following the podium speeches, each of the six school’s deans presented them with their diplomas. The traditional roll call of names often included costume-clad students joyously greeting their deans and program heads to eight-second snippets of sounds (usually music) of their choice.

A reception for students and guests followed in the Main Gallery.

Below are photos taken by Institute photographers, Scott Groller and Steve A Gunther. Above is Lasseter’s full speech.