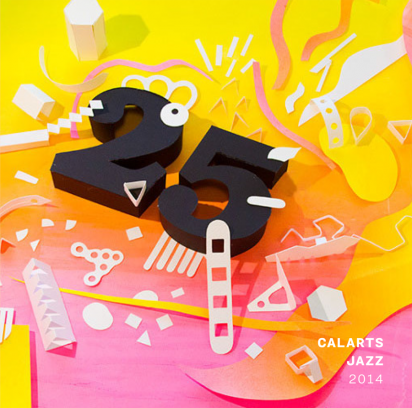 This year marks the 25th anniversary of the annual collaboration between Hollywood’s iconic Capitol Studios in Hollywood and the CalArts Jazz Studies Program to record a selection of original student works. The 2014 edition of the CalArts Jazz album was released on May 12 and is now available to stream and download for free online.

As previously posted, the album’s release coincided with an outdoor concert celebrating the quarter-century milestone at The Herb Alpert School of Music’s Wild Beast pavilion in April. The show featured a reunion performance by saxophonists Ravi Coltrane (Music BFA 90) and Peter Epstein (Music BFA 92), trumpeter Ralph Alessi (Music MFA 90, BFA 87), pianist James Carney (Music BFA 90) and bassist Darek Oles (Music BFA 92)—all of whom had appeared on the inaugural Capitol CalArts Jazz CD in 1990. The alumni set was preceded by performances of brand-new student works, some of which are on the 2014 album.

Stream and download the album for free at the The CalArts Jazz CD Archive, which also contains more than 25 hours of jazz from previous Capitol sessions.

Below is the track listing for CalArts Jazz 2014: