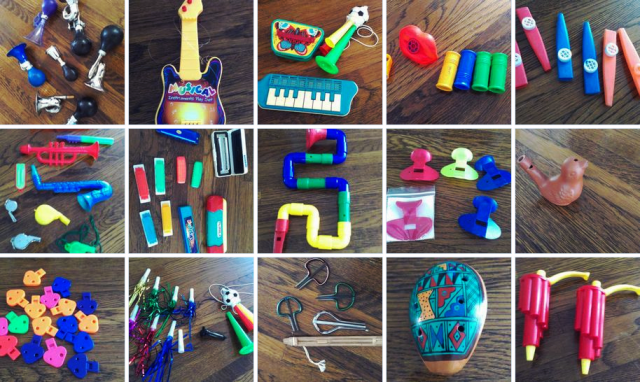 A sample of instruments to be performed in pieces for Dog Star Concert 9, curated by Liam Mooney. | Photos: Liam Mooney

The 10th iteration of the Dog Star Orchestra concert series once again brings the local experimental music community to the forefront in Los Angeles, with 15 events planned from May 30 to June 14.

Each concert is curated by a different artist or set of artists, and the music ranges from works with traditional instrumentation to music for toy instruments and sound makers to spoken word pieces. Programs include works by composers Tom Johnson and the late Robert Ashley, as well as new pieces from local composers.

“People came up with some really interesting programs with a ton of variety of music this year,” says Wambsgans. “In addition to concerts at CalArts, we’re so excited to have shows at Automata, Beta Level and Curve Line Space, among others.”

Some other less-traditional venues are also on the docket, including spoken text performances on Lower Grand Avenue (under Disney Hall and MOCA) created by Brendan Carn; a piece for road flares by Todd Lerew in the Pacific Palisades; and a number of concerts in private homes around the city.

Most of the concerts are free. All information and directions can be viewed on the Dog Star Orchestra site.

May 30-June 14
Various locations and times