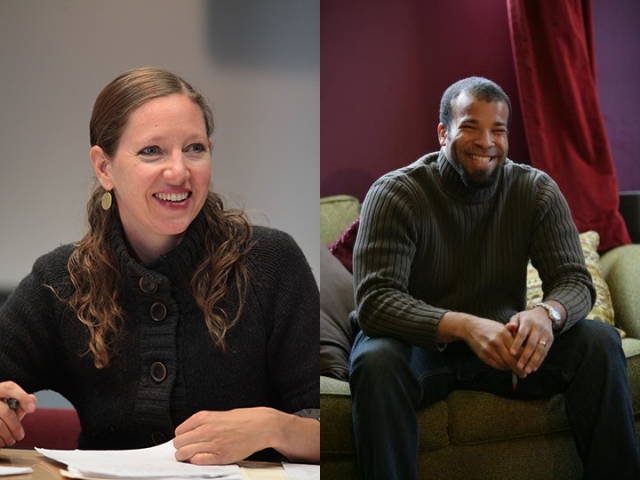 The city of Los Angeles is searching for a new poet laureate to succeed Eloise Klein Healy, the first artist to be named to the post. Residents of LA are welcome to nominate noteworthy poets or themselves, but last week, Los Angeles Magazine came up with four suggestions—and CalArts Creative Writing faculty Douglas Kearney (Critical Studies MFA 04) and Maggie Nelson make up half the list.

Kearney, who teaches at CalArts, published his first full-length collection of poems, Fear, Some, in 2006. In 2009, he followed it up with the critically acclaimed The Black Automaton, which won the National Poetry Series award. The collection seamlessly navigates disparate elements of 21st century living, from technology to race relations, all of it described by Kearney’s vivid language. Part of Kearney’s appeal is his expressive performance style and his visual approach to poetry; he often incorporates technology into his readings and supposedly composes his poems in Adobe InDesign.

In 2005, Nelson joined the faculty at CalArts, where she teaches literature and writing. She has four highly praised books of poetry under her belt and in 2011 was awarded the NEA Fellowship for Poetry. In her last collection, Something Bright, Then Holes from 2007, Nelson explores the boundaries between reality and poetry with a narrative voice that ties the whole collection together. Nelson’s poems operate on the outskirts of consciousness and reality, somewhere between this world and its underlying fabric.

Rounding out the magazine’s recommendations for the poet post are University of Southern California’s Susan McCabe and Pomona College’s Claudia Rankine.

The poet laureate of LA, who will be appointed by Mayor Eric Garcetti, is given an annual grant of $10,000. He or she will work with the Los Angeles Public Library to promote literature, poetry and spoken word to the public. The poet laureate will hold at least six classes or workshops held at the public library and write at least one commemorative poem about Los Angeles.