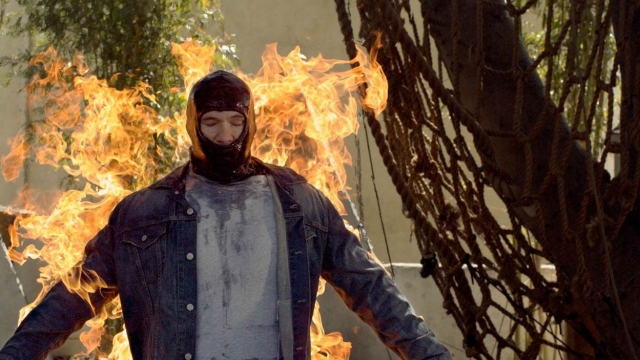 CalArtians are among the artists featured in the 2014 Made in LA Biennial. The exhibit opened on June 15 and runs all summer, through Sept. 7 at the Hammer Museum.

This year, artist Mariah Garnett’s (Film/Video MFA 11) 20-minute film Full Burn screens on loop at the exhibit, and was recently featured in the LA Weekly‘s preview of Made in LA. Now, the piece has been named “Best in Show” by the LA Times.

In Full Burn, Garnett examines the lives of former servicemen who now work as stuntmen in the Hollywood film industry.

More about the film from the LA Times:

If you can only see one piece out of this entire exhibition, head straight to Gallery 1 and take a seat for this riveting 20-minute video about former Navy SEALs and other servicemen talking about their new lives as Hollywood stuntmen — an occupation that requires them to set themselves on fire and jump off buildings. In a straightforward documentary style displayed on a pair of parallel screens, Garnett shows men discussing the challenging nature of their work in the military and in the movies.

Sometimes it can be difficult to know which line of work they are describing: “You’re not sure what is going to happen,” says one man. “But you are sure something is going to happen.” It’s especially poignant given the brisk resuscitation of the insurgency in Iraq over the past week. Who are the men we send to war? What have they seen and felt? And was it ultimately worth it? Questions you’ll be asking yourself long after the video is over.

Garnett, who works as a video documentarian for magazine photo shoots as her day job, met a stuntman who was formerly a special forces operative in Iraq, according to the LA Weekly preview. “He was on fire on a set when I met him,” she said.

On Tuesday, June 24, Garnett’s 2011 film Picaresques screens in Made in LA’s Moving Situations program, along with a film by Danielle Dean (Art MFA 12) and two films from local artist Emily Mast.

A still from Garnett’s 20-minute Picaresques is below. 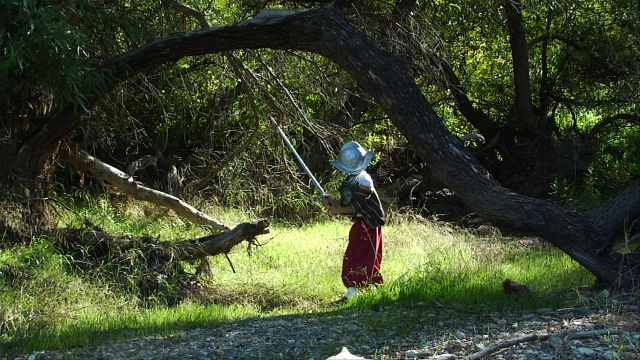 June 24, 7:30 pm
Hammer Museum
10899 Wilshire Blvd., Los Angeles
Free. Tickets for assigned seating in the Billy Wilder Theater are required and available at the Box Office one hour before each program.

Made in LA runs through Sept. 7