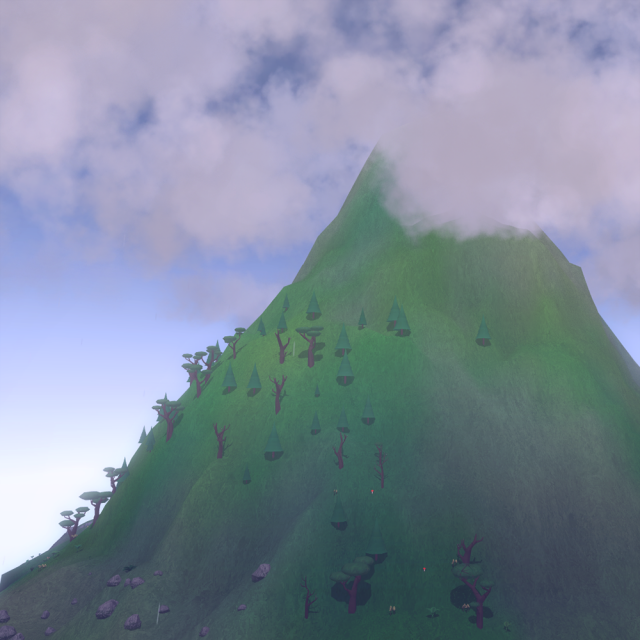 On July 1, animator David OReilly, who created the alien child hologram sequences in the 2013 Oscar-winning film Her, released his first video game, Mountain. The $1 app is described as “an ambient procedural mountain simulator,” and was made with the help of animators Charley Hodgkins (Film/Video BFA 14) and Michael Piazza (Film/Video BFA 14).

Mountain previewed at the video game conference Horizon on June 12 at MOCA Los Angeles. It has no controls, but includes about 50 hours of “gameplay” in which “time moves forward, things grow, things die and nature expresses itself.” More from the LA Times:

Mountain isn’t so much a game as an experience. Open up the app (which will be available for iOS, Mac and PC), and the game asks you a question that OReilly described in his presentation as “more psychologically invasive than anything Facebook wants to know about you.” There are questions about love and hate and how you feel about your mother.

The gamer responds by drawing a picture that expresses this idea, which the program then transforms into a living, breathing mountain on your desktop. Mountain is generative, which means that each peak it makes is unique. “It literally has billions of different mountains,” OReilly said.

Hodgkins’ film, The Pitch, screened at the 2014 Producer’s Show and he co-directed the show’s teaser with Nicolette Wood (Film/Video BFA 14). The Pitch is below:

OReilly gave a guest lecture at CalArts in January 2011.