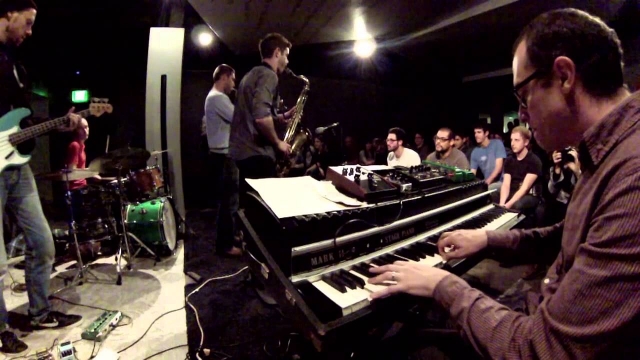 Above, Kneebody performs ‘Lowell’ last fall at the Blue Whale in Los Angeles.

There isn’t a handy term of genre for the music that Kneebody creates. It’s a band thoroughly acquainted with 1960s free-bop, 1970s jazz rock, 1990s hip-hop and postmillennial indie rock; along with classical postminimalism. (I’m leaving something out, I’m sure.) Whatever the terminology, this group has an audience: it’s set at Culture Project theater is packed beyond capacity, and the crowd has been vocal in its enthusiasm.

Kneebody collaborated with celebrated vocalist and composer Theo Bleckman for its 2009 album Twelve Songs by Charles Ives, which was nominated for a Grammy. Last year, its fourth studio album, The Line, was released on Concord Records.

Benjamin was listed among the keyboard greats on the 2013 Downbeat Magazine Critic’s Poll. Below, he discusses his roots at CalArts in a 2013 “choose your own adventure” video:

Wood was featured in Modern Drummer this spring. Below, he discusses his love of tacos: