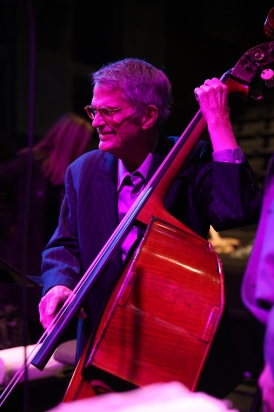 Charlie Haden, celebrated jazz bassist, composer, faculty and founder of the Jazz Studies Program at The Herb Alpert School of Music at CalArts in 1982, passed away on Friday (July 11). He was 76.

With a productive career spanning seven decades, Haden was “one of the most influential bassists in the history of jazz,” according to an obituary in The New York Times. He also “liberated the bass from its traditional rhythm section role,” wrote The Washington Post.

In 1959, while in his early 20s, he was a member of the Ornette Colman Quartet, in which he helped establish the sea change in jazz known as “free jazz” with alto saxophonist Ornette Colman.

In his tribute to Haden, which Dean David Rosenboom emailed to the CalArts music community this morning:

…In our School, Charlie was first and foremost a guide to the roots of inspiration. He helped lead many toward finding a place of ineffable, musical knowing-ness. He taught not just the bass, not just jazz, but how to dig out from one’s inner being what he might have described as true musical honesty, that richest soil from which true musical creativity best flowers outward. This is one way in which we can remember Charlie, and perhaps in that remembering, be propelled in our own individual, original musical energies, which Charlie just might feel would honor him the best.

The pioneering musician was awarded the 2013 Lifetime Achievement Award at the Grammys (in addition to receiving 3 Grammys), was National Endowment for the Arts Jazz Master in 2012 and a Guggenheim fellow. He was also the subject of Reto Caduff’s 2009 documentary Rambling Boy.

Haden’s Liberation Music Orchestra, a large jazz ensemble that he formed in collaboration with composer-arranger Carla Bley, has performed and recorded political protest songs since 1969. In December, Haden conducted the ensemble in a performance at REDCAT. Above is a photo of Haden from the event.

Read more tributes to Haden in The LA Times, NPR, KPCC, The Atlantic and Variety.