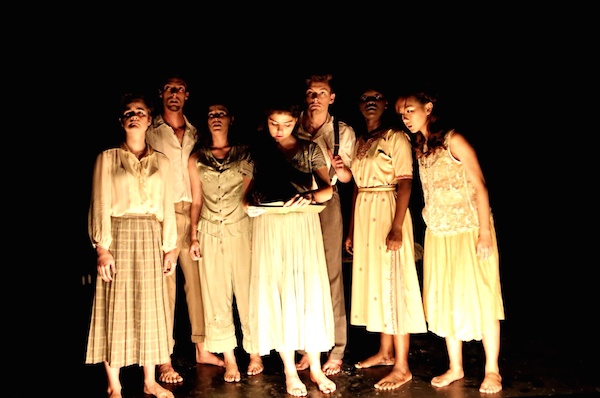 The cast of ‘Into The Fog.’ Photo: Erica Shay

According to the Hollywood Fringe organizers, last month’s fifth annual festival was a huge success with record-breaking online ticket sales and attendance. (The festival sold 46,000 tickets this year, 11,000 more than in 2013.) One piece that garnered notable individual success was Into the Fog by MFA Directing candidate, Samantha Shay (Theatre MFA 16) and her collaborator, Sam Szabo.

Into the Fog won three festival awards; the community-voted award for Best in Dance & Physical Theatre as well as the Duende Distinction, and Encore! Producers’ sponsored awards. “Into the Fog highlights that communal experience that creates a kind of sacred and transformative energy, a ritual space,” says Shay. “This is what theatre is, at least to me, when it is most essential and successful. I believe this is why Into the Fog speaks to so many people.”

Along with winning three awards, the piece also chalked up accolades by the public and the press. From Bitter Lemons, an L.A.-based theater review site:

This beautiful movement-dance piece directed by Sam Szabo and Samantha Shay, is wonderfully inventive and stunning. The ensemble of eight moves with great control and dexterity and [each member has] engaging facial expressions.

Although there’s not much of a storyline here (and when you think you have some sort of a narrative it changes pace completely), the sheer beauty of the piece washes over you and is incredibly interesting to watch. Again, the ensemble’s focus and dedication must be praised. …

Full reviews were all made available on the Fringe Festival’s website and, no doubt, helped curate interest for Into the Fog. This type of infrastructure is just one of the advantages–one could say “Fringe benefits”–of presenting work at a festival. Another, Shay noted, was the opportunity to have a long run in the theater.

“It served us in many ways, not only because more people could come to see it, but also because we could evolve as an ensemble. By the end of the run, we had really reached a strength as performers that was ultimately the most important thing for the well-being of the performance. I have never had that luxury as a director, producer, or performer… it truly made all the difference.”