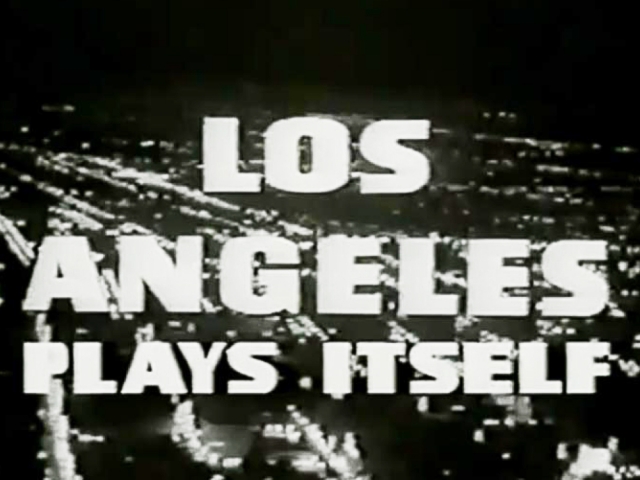 Expanded from a late 1990s CalArts lecture and finished in 2003, the 169-minute film essay is composed of clips from more than 200 films set in Los Angeles. Heard over scenes from famous, not-so-famous and obscure films—Chinatown, Double Indemnity, Sunset Boulevard and The Exiles, to name just a few—is the voice of Encke King narrating a treatise on how the City of Angels is presented on the silver screen. The narration systematically confronts and debunks, or at least adds nuance to, Hollywood-perpetrated stereotypes of Los Angeles, including the notion that nobody walks in the city.

But Los Angeles Plays Itself is far more than an architectural survey or illustrated walking tour. It’s Andersen’s highly quotable, fiercely political attempt to reconcile the multiple cinematic identities of the world’s most frequently filmed metropolis, a “city symphony reverse” about a place “where the relation between realism and representation gets muddied.” Whereas New York is always sharply in focus and instantly recognizable from almost any camera angle, the movie argues, Los Angeles is hazy and hard to get right, a series of neighborhoods “joined together by mutual hostility.”

“It all adds up to a study too vast in scope and ambition to digest in one sitting, its insights inexhaustible even after multiple viewings,” says a review in The Village Voice. “But the real revelation of Los Angeles Plays Itself, and the quality which elevates it from accomplished to masterful, is its warmth—its clear affection and enthusiasm for the movies. As criticism, the film is perceptive, persuasive, even educational. As cinema, it’s something more: one of the great films of the century to date, poignant and affecting. Andersen’s essay is deeply felt.”

Although the film received critical acclaim and various awards, very few cinephiles believed that it would ever be widely distributed because its use of so many films was sure to trigger a host of copyright lawsuits. But Los Angeles entertainment lawyer Michael Donaldson has combed through Los Angeles Plays Itself frame by frame and has determined that each of the sampled clips falls under the definition of fair use, meaning they can all be shown without permission.

Independent films distributor The Cinema Guild will release Los Angeles Plays Itself on Sept. 30, along with two other Andersen films: Eadweard Muybridge, Zoopraxographer from 1975 and Reconversão, his latest from 2012.

Below is a trailer for Los Angeles Plays Itself and above is a 6-minute clip, wherein the film illustrates Hollywood’s ideological war against modern architecture.