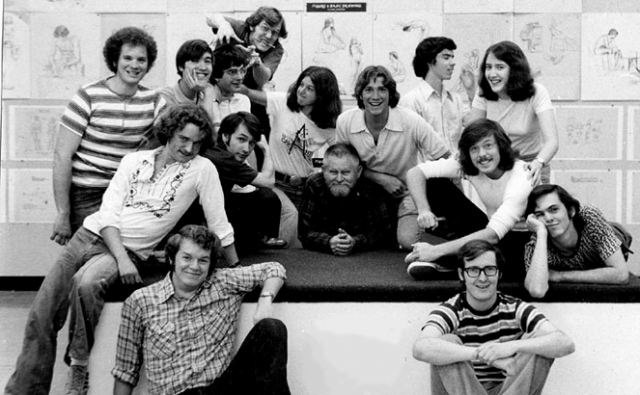 Hulett says that CalArtians were among the new artists at Disney in 1980, presenting new ideas that were not always welcomed by producers at the time. His first-hand account details the young artists’ frustrations, specifically discussing their work on the 1981 feature, The Fox and The Hound. More from Hulett:

Most of the CalArts group groused about the old-timers’ stodgy, moldy fig attitudes, and the stodgy, moldy fig product that resulted therefrom. … Brad Bird had already gotten his ass fired for making his gripes too loud and too public, but the general mood of frustration and desire to try something fresh, new, and different continued.

Even with the bad feelings, various CalArts graduates were being groomed for better things. Early on, John Musker jumped on a career track pointed toward director. John Lasseter was assigned to different projects in development. Bruce Morris and Joe Ranft quickly worked their way into story development.

Last May, Lasseter, who currently serves as chief creative officer of Walt Disney and Pixar Animation Studios and principal creative advisor of Walt Disney Imagineering, received an honorary doctorate from CalArts, and during his acceptance speech, spoke of the changing landscape at Disney early in his career.

Read more about the “who’s who” of CalArts animators featured in the Dec. 2013 edition of Vanity Fair and watch CalArtian animators play volleyball against Disney producers in 1980.