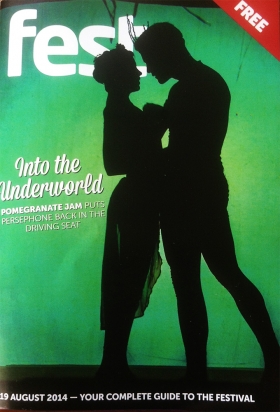 ‘Pomegranate Jam’ on the cover of ‘Fest Magazine.’

The Edinburgh Festival Fringe is in full swing, and the CalArts Festival Theater, with its four productions, has been drawing praises from theater reviewers.

Pomegranate Jam, a retelling of the Greek mythology of Persephone’s descent into the underworld, was given a five-star review by Fest Magazine and was featured in its August 2014 cover:

In Pomegranate Jam, what was once little more than an imaginative metaphor for the changing of the seasons becomes a timeless, moving coming-of-age tale which achieves more with its deceptive simplicity than many productions with twice the length or budget. A humble triumph.

Things From Before’s The Intruder, Pt. 4, the adaptation of Maurice Maeterlinck’s 1890 play, also received a five-star review from Broadway Baby:

There is satisfying sense of cohesion in this holistic production. The stunning set is intimately intertwined with the actions of the performers and succeeds in raising questions about the nature of perception. The haunting, shimmering original score that accompanies parts of play perfectly suggests the presence of dark forces. Combined, they remind us of the inadequacy of language alone to convey meaning.

The festival runs through Aug. 25 in Scotland.