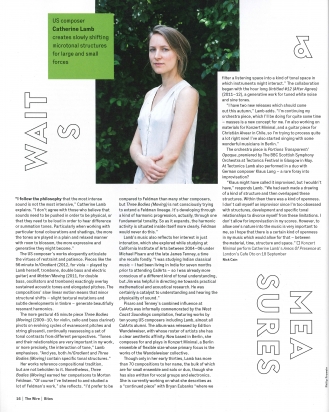 Composer Cat Lamb was profiled in the September edition of ‘The Wire’ #367.

Update 9/8/14: Multimedia artist Andres Vida (MFA Music/IM 05) was also featured in this issue of the ‘The Wire.’

Earlier today, we posted that dean of The Herb Alpert School of Music at CalArts David Rosenboom was featured in the September edition of The Wire, #367. In the same issue, Berlin-based composer and alumna Cat Lamb (Music MFA 06) was profiled by Nick Cain—a piece which delved into Lamb’s writing philosophy and her influences.

Lamb, who’s in her early thirties, has written more than 70 pieces, including compositions for solo, duo and small ensembles, vocal groups and electronics.

Lamb’s music also reflects her interest in just intonation, which she explored while studying at California Institute of the Arts between 2004-06 under Michael Pisaro and the late James Tenney, a time she recalls fondly. “I was studying Indian classical music—I had been living in India for seven months prior to attending CalArts—so I was already more conscious of a different kind of tonal understanding, but Jim was helpful in directing me towards practical mathematical and acoustical research. He was certainly a catalyst to understanding and hearing the physicality of sound.”

Pisaro and Tenney’s combined influences at CalArts was informally commemorated by the West Coast Soundings compilation, featuring works by ten young US composers including Lamb, almost all CalArts alumni.

Excerpts of Lamb’s work are streaming on The Wire‘s website. In June, Lamb’s work was premiered by the BBC Scottish Symphony Orchestra.

The July passing of Charlie Haden, founder of the CalArts Jazz Program, was noted on page 9 of The Wire #367. Read it here.