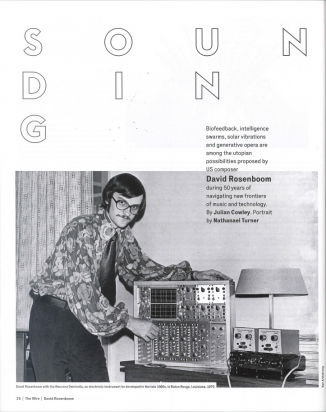 Dean David Rosenboom is featured in ‘The Wire.’

Dean of The Herb Alpert School of Music at CalArts David Rosenboom is the subject of a full-length feature titled “Sounding the Cosmos” in the September issue of the influential London-based experimental music magazine The Wire #367. In addition, the magazine also makes available an audio selection of annotated excerpts of his work and an exclusive video.

The eight-page profile outlines Rosenboom’s background, his compositions and his commitment to propositional music—a means of approaching composition using cognitive models. Among Rosenboom’s compositions are works that draw inspiration from biofeedback and the sun’s acoustic vibrations, such as in Bell Solaris, a 12-movement work for piano based on solar vibrations. Below is a video excerpt from the magazine of Rosenboom playing the piece:

“Music is for him a model-building discipline as much as a means of expression,” according to The Wire. “Rosenboom accepts not only instrumental design but the conceptual models or idea initiating such design as an integral part of the music making process. Notation may be a part of that process; so too sounds in the air and ear.”

“Much of my music might be called noise music, because of the way it handles complexity,” Rosenboom says. “I love complexity, not because it represents some higher level of something, but because it is simply another name for a rich soundworld, inside which one might explore endlessly and find extraordinary relationships that can only be found through active imaginative listening. Calling it noise helps strip away stylistic listening assumptions. That’s a good thing, as long as we maintain awareness of all that’s going on in the glorious noise of our inner neural beings.”

Founded in 1982, The Wire is an independently published avant garde music magazine based in the UK. It covers experimental music, hip hop, modern classical, free improvisation, post-rock and electronic music. The September issue is now available on newsstands.

This month’s issue also includes a feature on composer Cat Lamb (Music BFA 06), which we’ll post about this afternoon.