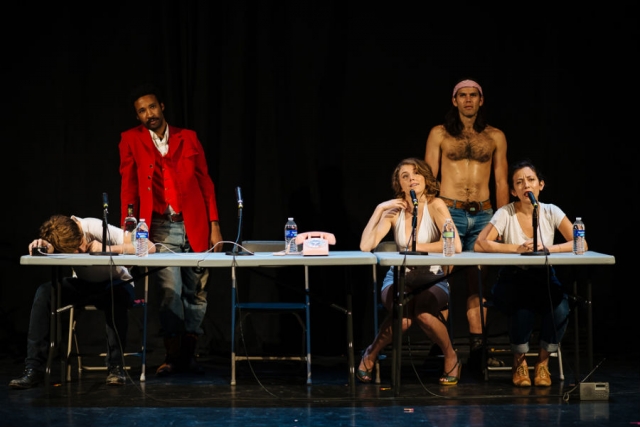 ‘Dedicated to a True Lover (and therefore probably nobody)’ is one of the productions at the LAX Festival. (Photo: Amanda Shank)

The second annual Live Arts Exchange (LAX) festival—a series of new works from Los Angeles-based artists—returns to the Bootleg Theater in Los Angeles this week with a slate of productions that feature a cross-section of theater, dance, music and performance. Presented by Miranda Wright (Theater MFA 09) and her Los Angeles Performance Practice producing organization, the festival includes several works by CalArts alumni.

LAX Festival performances begin on Wednesday night (Sept. 10) with the Los Angeles premiere of Surfacing, a multimedia work by Portland, Oregon-based musician Holcombe Waller. The piece incorporates the stories of characters at a living room party with a nod to the 2011 Marina Abramovic/MOCA Gala controversy.

Several of the artists had previously worked with Moore during a staging of Fassbinder’s The Bitter Tears of Petra Von Kant at CalArts in 2010. Dedicated to a True Lover (and therefore probably nobody) runs on Sept. 18 and 20 at 8 pm and Sunday, Sept. 21 at 4 pm.

Rachel Ho’s (Film/Video BFA 14) thesis project Sleighting, which first debuted at CalArts in the spring, is being performed at the LAX Festival on Sept. 20. The multimedia work incorporates live performance, realtime motion capture and the ability to manipulate a live avatar before an audience. A video excerpt of Ho’s performances at CalArts is below.

Visit the LAX Festival site for the full slate of programming, which runs through Sept. 21.

SLEIGHTING from Rachel Ho on Vimeo.

The Bootleg Theater
2220 Beverly Blvd., Los Angeles
Tickets: $15-$20
CalArts community can purchase tickets for $10 with the use of the code "calartsmafia."