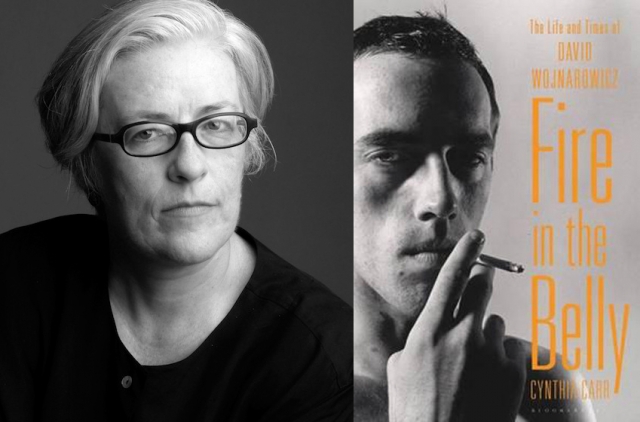 Author Cynthia Carr (left) and the cover of her new biography, ‘Fire in the Belly: The Life and Times of David Wojnarowicz.’ | Courtesy School of Critical Studies.

This Thursday (Sept. 25), as part of the School of Critical Studies’ Writing Now Reading Series, writer Cynthia Carr reads from and discusses her newest biography, Fire in the Belly: The Life and Times of David Wojnarowicz.

David Wojnarowicz (1954-1992) was an East Village painter, photographer, writer, performance artist, filmmaker and AIDS activist in the 70s and 80s who returned to the headlines in 2010 when Catholic and political leaders pressured the Smithsonian’s National Portrait Gallery into removing an excerpt from his short silent film, Fire in My Belly, from a show because it contained an 11-second scene of ants crawling over a crucifix.

View the full work in the video below:

The New York Times calls Fire in the Belly “thorough and sensitive… both sympathetic and compendious.” In an article and interview, Paper Magazine calls the biography “a loving tribute to an artist who became one of the leading voices of his generation by being uncompromising and fierce in his belief in the power of art to influence the world.”

Carr was a columnist and arts reporter for The Village Voice from 1984 to 2003, covering the arts when Wojnarowicz and his contemporaries were active in the East Village art scene. Her writing has appeared in The New York Times, Artforum, Bookforum, and Modern Painters.