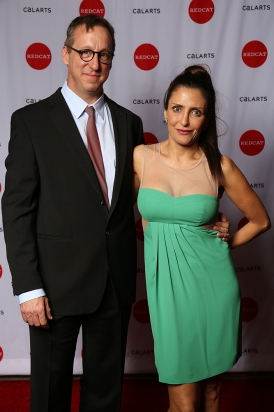 Tim Disney with wife Neda Disney at the REDCAT Gala in March. | Photo: Steven A Gunther.

Tim Disney, entrepreneur and co-founder of independent film and documentary production company Uncommon Productions, has been appointed Chairman of CalArts’ Board of Trustees.

Disney is great-nephew to Walt Disney and grandson to Roy O. Disney, the co-founders of CalArts. His father, Roy E. Disney, also served on CalArts’ board and contributed to the construction of REDCAT. Tim Disney replaces Austin M. Beutner, who stepped down as board chair in August of this year to become CEO and publisher of the Los Angeles Times. Beutner remains a CalArts trustee.

In an email to the Los Angeles Times, Disney writes:

Our faculty and alumni have transformed culture throughout the country and the world. I hope to help CalArts carry on the tradition of excellence, and to foster the spirit of experimentation and innovation that have made CalArts one of the country’s truly great educational institutions.

“We are thrilled that Tim Disney has agreed to serve as Chair of CalArts Board of Trustees,” says CalArts President Steven Lavine. “Tim grew up with, and is deeply committed to, the vision of CalArts as an interdisciplinary, technology-friendly college of the arts, focused on educating the gifted students who will shape the future of art and entertainment. Under his leadership, I am confident that we will carry on, where his predecessor as Board Chair left off, without missing a beat.”