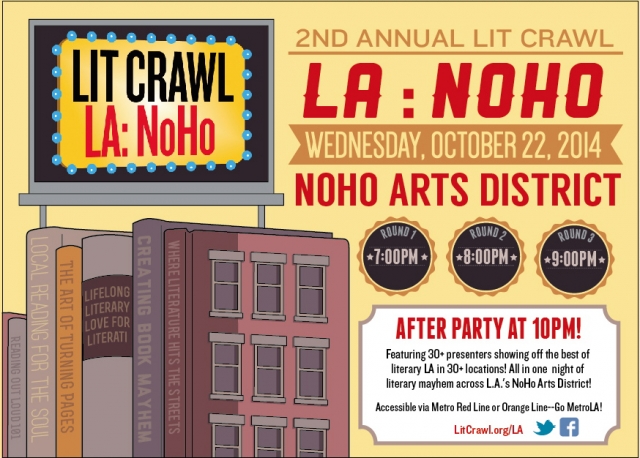 On Wednesday (Oct. 22), Lit Crawl: LA NoHo returns for a second year of readings, performances and a celebration of literature. The event, an offshoot of San Francisco’s popular annual literary festival Litquake, takes place in several venues in the North Hollywood Arts District.

This year’s event is composed of three rounds of readings starting at 7 pm, followed by an after party at The Federal Bar on Lankershim Boulevard. Among the many poets, playwrights, screenwriters and fiction writers giving readings at the event are several CalArtians, plus an event hosted by the literary magazine Black Clock.

CalArts alumnus and faculty Douglas Kearney (Critical Studies MFA 04) reads with fellow writers Antonia Crane, Corrie Greathouse, Wendy C. Ortiz, Jim Ruland, Kyle Sawyer and Jerry Stahl at The NoHo Arts Center for Round 2 at 8 pm. The event, titled A Scream Without a Mouth: Stories of Reaching Out and presented by journals The Rumpus and The Rattling Wall, features writers who “dig into the abyss for [their] darkest tales in order to hold them up to the light and show you their inherent, convulsive beauty.” 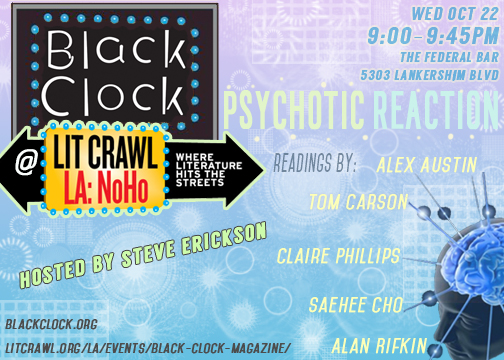 All events in Lit Crawl: LA NoHo are free, and all venues are within walking distance of the Metro Orange and Red Lines. An RSVP is required for the 10 pm after party at The Federal Bar. See the complete schedule.

A Scream Without a Mouth: Stories of Reaching Out
8 pm
The NoHo Arts Center
11020 Magnolia Blvd., Los Angeles