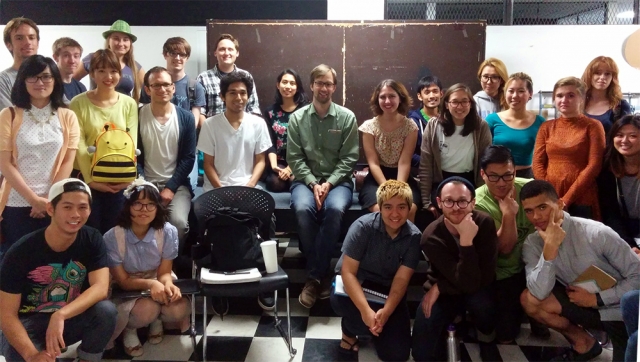 Ryan Germick (center) with students from the Program in Character Animation.

On Oct. 10, Google’s Ryan Germick visited from the company headquarters in Mountain View, Calif. to CalArts’ campus in Valencia, Calif. to give a lecture for Program in Character Animation Director Maija Burnett’s Flash class. Germick is the Lead Illustrator (or Doodler, as they are called) for Doodle, the spontaneous changes that the Google logo undergoes to celebrate holidays, anniversaries and famous people.

Since Doodle’s inception in 1998 (the founders used it as a comical way to let users know that they were out of the office to attend the Burning Man Festival in Nevada), it has grown to a core team of doodlers, engineers and producers, plus hundreds of volunteers who celebrate and commemorate subjects as diverse as Diwali, Hannah Arendt and Doctor Who.

“Doodle humanizes Google,” Germick said, “It turns the Google logo into something that people can have feelings towards.”

When asked how Doodlers determine which subjects to feature, he said that it’s mostly about what team members are interested in and what they’re passionate about. They don’t rely on too much market research, although they do have cultural consultants, who let them know if a Doodle that’s for an international audience might be deemed offensive. They also strive to be informative, using the platform to draw attention to lesser-known historical figures such as Ada Lovelace and Rachel Louise Carson. “It’s more NPR than MTV,” Germick said.

Burnett’s students are working on individual concepts for hypothetical Google Doodles, as well as other projects involving animation and design. See their submissions through their class Tumblr page.