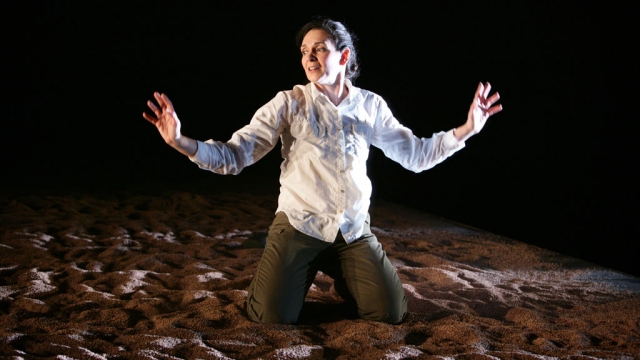 ‘Daughter of a Cuban Revolutionary.’ |Photo courtesy of Miranda Wright.

On Friday (Oct. 31), CalArts School of Theater faculty Marissa Chibas’ Daughter of a Cuban Revolutionary, which premiered at REDCAT in 2007 and has since been performed in numerous cities in three countries, returns to Los Angeles as part of Encuentro 2014, Los Angeles Theatre Center’s National Latino/a Theater Festival.

Presented by CalArts Center for New Performance and Duende CalArts, an initiative to explore Pan-American work and issues, the solo show explores Chibas’ personal history within the context of Cuba’s tumultuous past. Propelled by a near-drowning in the Venezuelan Amazon, Chibas explores self and exile through the lens of her intriguing family: Her uncle Eduardo Chibas was a presidential contender before denouncing Batista and committing suicide during his influential radio show in 1951; her father, Raul, helped write the manifesto for the Cuban revolution with Fidel Castro, and her mother Dalia was an actress, socialite and runner-up for Miss Cuba 1959.

“[Chibas] hooks us emotionally at the outset, and we’re right with her for the rest of her journey of self-discovery,” writes the Los Angeles Times. What’s On Stage remarks, “This terrific, essential show offers a touching tale of a daughter desperate to find her roots and a fascinating insight into the inner workings of a revolution.”

The show runs through Nov. 8. Below is a video of Chibas promoting Daughter of a Cuban Revolutionary for Encuentro.

Daughter of a Cuban Revolutionary