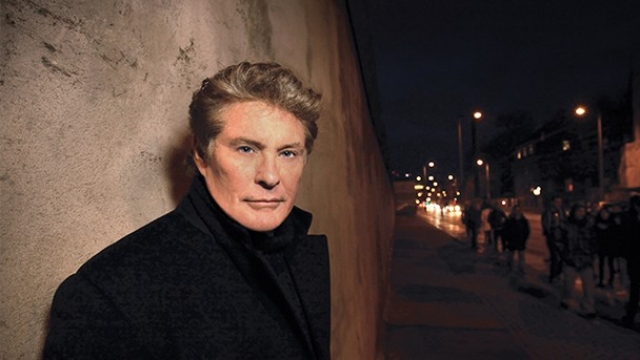 David Hasselhoff stars in ‘Hasselhoff vs. the Berlin Wall’ on the National Geographic Channel. (Image: Courtesy of NatGeo)

In conjunction with the 25-year anniversary of the Fall of the Berlin Wall this Sunday (Nov. 9), the Berlin branch of the Madame Tussauds chain has placed a life-sized wax statue of David Hasselhoff (Theater 73) next to the city’s famous Brandenburg Gate to celebrate the actor and singer’s incidental, though fondly remembered, role in the early stages of German reunification.

It was only weeks after the 1989 lifting of the travel ban from East Berlin to West when “The Hoff” was invited to perform as part of an historic New Year’s Eve concert staged atop the partially-dismantled Wall—a cultural landmark that brought together a crowd of 500,000 from both halves of the long-divided city. The singular emotional highlight of the show was the CalArts alum’s rousing rendition of his hit anthem, “Looking for Freedom.”

Best known in the U.S. and globally for his iconic roles in the TV programs Baywatch and Knight Rider, Hasselhoff has also enjoyed a successful career as a pop music artist throughout the German-speaking world.

In the fall of 1989, before the Wall came down, the already popular artist had topped the West German charts with an English-language cover of a ’70s-era song called “Auf der Straße nach Süden,” reworked then as “Looking for Freedom.” In the wider political context, the tune turned out to also resonate hugely with protesters from the East, who adopted its chorus as their own lament:

Hasselhoff recently revisited the Berlin Wall for a National Geographic Channel special. In Hasselhoff vs the Berlin Wall, the performer traced the wall’s history, met with people who lived behind the wall and explored the fate of its remnants today. Although the program aired in the U.S. in September, it’s being televised this week in several European cities to commemorate the anniversary.

Here’s video of The Hoff’s original, historic performance in Berlin: