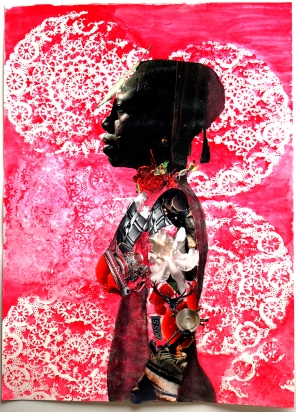 Krista Franklin, ‘Do Androids Dream of How People Are Sheep?,’ mixed media on watercolor paper, 24 in x 30 in, 2010. | Photo: Stephen Flemister. Courtesy of and © Krista Franklin.

The event opens with a keynote address on the evening of Nov. 14 at REDCAT delivered by Alexander Weheliye, professor of African American Studies at Northwestern University. His address, Feenin’: R&B’s Technologies of Humanity presents a critical history of the relationship between R&B and technology since the 1970s.

Communications and other technologies have been a steady presence on R&B recordings as lyrical topics and as structural components for some time. At the moment, lyrically, nary a hit song exists without the mention of cellular phones, beepers, two-way pagers, iPhones, Blackberry’s, answering machines, various surveillance gadgets, email messages, the internet, Twitter, etc., stressing the interdependence of contemporary interpersonal communication and informational technologies….

…Hip-hop star Drake proclaims that he can only write his rhymes on his BlackBerry mobile device. In an MTV documentary, (Mack and Warren 2010) Drake’s producer describes the artist’s process thus: “All Drake’s raps for eternity have been written inside of a Blackberry…. I’ve had dummy Blackberrys around that I just pull out for him to write on, like if he needs one…. that don’t actually even work!” This is how Drake portrays how he works: “I can’t write my raps on paper. The Blackberry keys—my thumbs were made for touching them” (quoted in Ziegbe 2010).

On Nov. 15, numerous panels will be held at the West Hollywood Public Library, with topics including how black users navigate a digital realm teeming with racial(ized) performance, how social media builds community and activism, and how the surfeit of information on the Internet affects members of the African diaspora who search for their histories.

This Isn't About the Future: Black Digital Culture Now