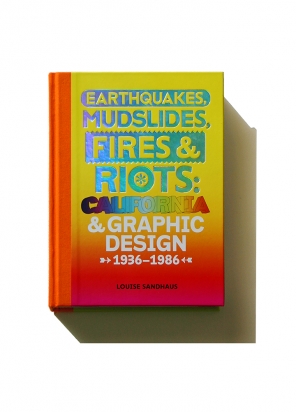 Update 6/22/15: Louise Sandhaus’ book is in competition at the Festival international du livre d’art et du film (FILAF) in Perpignan, France. What a Riot!: An Earthquake, Two Mudslides, and a Girl on Fire was chosen as a finalist among 500 art books all over the world.

On Nov. 22, the MOCA Store presents the panel What a Riot!: An Earthquake, Two Mudslides, and a Girl on Fire, in conjunction with the launch of the book Earthquakes, Mudslides, Fires & Riots: California and Graphic Design 1936-1986 by CalArts faculty Louise Sandhaus (Art MFA 94).

In an interview with Inform.Design, CalArts’ Graphic Design Program, Sandhaus talks about how she first got the idea for the book:

In the late 1990s… several commissions to work on exhibitions about California art and artifacts came our way, beginning with the huge millennial exhibition at LACMA, Made in California: Art, Image, and Identity, 1900-2000. It struck me that this work took a distinct turn towards rebelliousness around the mid-century: a “fuck-you” to New York and European art tradition. Makers who seemed to be defining art for themselves were challenging the older trends.

You see this attitude and its outcomes exemplified in the “finish-fetish” work of Billy Al Bengston who employed materials used for creating surfboards and customizing cars, or in Robert Irwin’s investigations of the particular qualities of Southern California light, or in the work of Judy Chicago, who used women’s domestic labor as a worthy subject.

Earthquakes, Mudslides, Fires & Riots is the first publication to capture the enormous body of graphic design that came from the Golden State throughout most of the 20th century. The book took more than a decade of research and curation to come to fruition, and contains hundreds of distinctively California projects.

There will be a book signing following the the panel. Read an excerpt from the publication here.

What a Riot!: An Earthquake, Two Mudslides, and a Girl on Fire