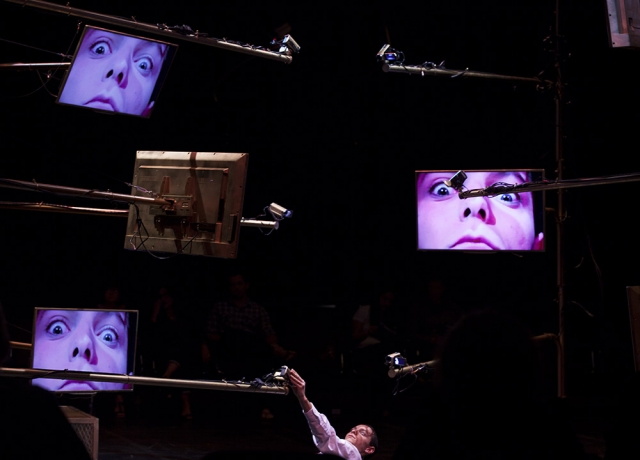 From ‘The Government Inspector.’ | Photo by Brittany Jaime.

The CalArts School of Theater presents Nikolai Gogol’s 1836 political satire The Government Inspector. The play centers around a corrupt town thrown into a state of panic upon hearing word that a government inspector is on his way to investigate them. Mistaken identities, massive bribes and corruption abound.

The first time I read The Government Inspector as a freshman in college, I remember laughing aloud at its ridiculous characters and the circumstances in which they found themselves. They were unscrupulous, idiotic, ill-mannered, and cruel, and looking back it seems I registered only the humor and my own amusement at how they navigated the issues of the text. Revisiting the play years later, I was disheartened to find that it didn’t seem as comical to me as it once had.

Reading the news and watching television, our cast saw each of the injustices Gogol sought to represent in his play depicted in front of us, nearly 200 years after its first publication. Brazen political figures engaging in morally reprehensible behavior, police officers using excessive force without just cause, government funds being embezzled and redistributed behind closed doors—these things are so commonplace in our daily lives that they aren’t even shocking anymore. They have become the norm, and as an ensemble we discovered that Gogol’s text now resonates in a way that makes it feel anything but dated.

The Government Inspector runs through Saturday (Nov. 15) in the Modular Theater.