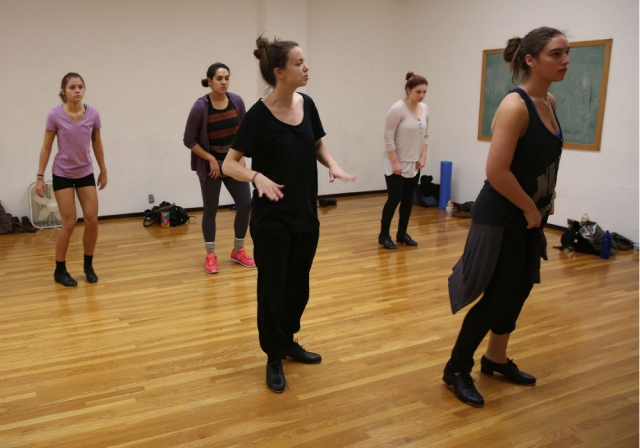 Choreographer-dancer Michelle Dorrance (center, in all black) was in residency at CalArts earlier this month.

Early this month, tap dancer and choreographer Michelle Dorrance visited The Sharon Disney Lund School of Dance at CalArts for a week-long residency as part of her 2014 Herb Alpert Award in the Arts. During her stay, Dorrance lectured, taught workshops and rehearsed with students who’ll be performing one of her pieces in the Winter Dance Concerts at CalArts and REDCAT in December.

“I had adapted an evening-length work into a 15-minute excerpt for Fall for Dance at City Center, which is a big dance festival in New York City,” said Dorrance during a break between classes. “That segment serves as the foundation for the dance work at CalArts.”

The original piece, SOUNDspace, was a site-specific work for St. Mark’s Church in New York’s East Village, and one in which Dorrance drew upon the reverberations in the church to help shape the piece. “It was all about sound, texture, creating different rhythmic ideas and grooves and polyrhythms, which is basically what we do—movement as music.”

With the CalArts performers, she explored similar themes including simple counterpoints, complex polyrhythms and “groove-based material that develops and builds tensions.” They also worked with different textures, performing in various shoes and socks, testing the different sounds on the acoustics and floors of both REDCAT and the Lund at CalArts. Dorrance was impressed with the CalArts performers, even without a formal tap program at the Institute. “I told them this today. I could be working with a group of incredibly advanced tap dancers, and they’ll make mistakes even more so than we have so far.

“They have an incredible focus, and I really like working with this group,” she added.

Dorrance’s road to tap came from an early realization that she wouldn’t be an international caliber soccer player—her father Anson Dorrance coached the U.S. National Women’s Soccer Team to their first World Cup title in 1991 (and continues to coach the UNC Chapel Hill Women’s Team); nor would she be a ballet dancer like her mother, who owns her own ballet school in North Carolina. “In ballet, I knew I didn’t have ‘the line,’ and I was the only one in class that couldn’t do a split in both legs…but there wasn’t a second that tap didn’t feel natural and I wasn’t passionate about it.”

Gene Medler, who founded the North Carolina Youth Tap Ensemble in 1983, was Dorrance’s first tap teacher and had a profound influence on her career. It was Medler, she said, who fostered a community of tap dance artists and masters to perform and speak to his students. She recounted going to tap dance festivals and conferences and meeting dance artists like Charles “Honi” Coles, a young Savion Glover, Henry LeTang, Buster Brown and even Fayard and Harold Nicholas—the Nicholas Brothers—who were stars of the jazz circuit during the Harlem Renaissance. “I was able to sit in class and hear stories from them,” she said. “Part of our [tap] community is an oral tradition.”

Another huge influence on Dorrance’s career was dancer-choreographer Gregory Hines, who made quite an impression on the budding 9-year-old performer. “I remembered what inspired me in 1988 was his movie Tap. You better believe that we [her dance class] rewound Tap until we learned that little segment. And we put it in our recital dance that year,” she said. “We were obsessed.”

Dorrance’s current work includes The Blues Project, a “dream collaboration” with two of her favorite soloists and choreographers Derick K. Grant and Dormeshia Sumbry-Edwards, whom she described as “both really entrenched in the legacy of tap dance as a form and simultaneously, two of the most cutting-edge soloists, technically, on the scene.”

The work was most recently performed at The Broad Stage in Santa Monica on Nov. 1 with live music by composer Toshhi Reagon and her band, BIGLovely. Reagon is the daughter of Bernice Johnson Reagon, founder of the famed a cappella ensemble Sweet Honey in the Rock, and Dorrance said she finds inspiration in Reagon’s legacy of music and activism.

“The relationship between tap and the blues is one that isn’t explored a lot. You see tap and jazz coupled together, which is true because tap always pushed jazz in a rhythmic sense,” she said. “But truthfully, the history of tap mirrors the history of the blues. They’re both rooted in the 1800s in black spiritual dance and song. They both went through absorption in the entertainment industry, and a tremendous amount of oppression and racism. If you look at the way blues became white rock and roll and you look at what happened with tap dance—innovated truly in the black community—but it’s almost entirely white in the movie musical.

“Yes, you know of the Nicholas Brothers, but they were never on a movie poster in the States.”

“It’s just interesting that these two forms really represent the history of America, in a way,” Dorrance said. “Blues and tap dance both embody a history of such oppression, but both transcend that and become expressions of joy.”

Cab Calloway and The Nicholas Brothers medley from Stormy Weather (1943).