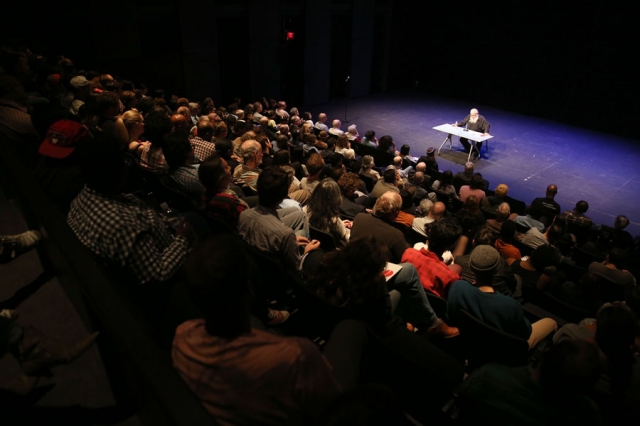 Last week, celebrated science fiction and fantasy author Samuel R. Delany, a.k.a. Chip Delany, made his first visit to CalArts as the School of Critical Studies’ 2014 Katie Jacobson Writer in Residence. An award-winning author of 20 novels since 1962, Delany shared his work and experiences with students, faculty and fans during readings at CalArts and REDCAT. 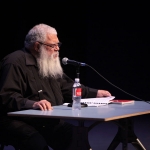 Much of Delany’s body of work, which includes numerous memoirs and essays, focuses on themes of sexuality and society, as well as class, memory, mythology, perception and language.

Delany met MFA writing students in small groups on two mornings last week, answering questions in a more intimate setting and offering feedback on student work. On Thursday (Nov. 13), he spoke at Langley Hall at CalArts about his early years as a writer in New York and read the 12-page introduction to his forthcoming collection of three science fiction novels written in 1961-62, titled ABC. The collection will be released sometime in the spring or summer 2015.

[At the Langley talk, Delany answered] questions with his characteristic mix of erudition, humor, generosity, gregariousness, and wisdom. His presentation at REDCAT on Saturday [Nov. 15] to a full house of fans, friends, and family was similarly inspiring. The MFA program benefited not only from studying his novels and memoirs in preparation, the small group meetings, and hearing him read aloud, but also from his singular presence: Chip simply emanates history, gathered over 50 years of courageous writing and living. He is also deeply engaged in the present, not to mention visionary as to our multiple possible futures. It was truly a pleasure and honor to have him as part of our community for the week.

Delany was inducted into the Science Fiction Hall of Fame in 2002 and holds four Nebulas, two Hugos and the Bill Whitehead and Lambda Awards for lifetime achievement. His novels include Nova (1968), Dhalgren (1975), the Return to Nevèrÿon series (1979-87), Hogg (1995) and the Stonewall Award-winning Dark Reflections (2007).

Read a summary of Dhalgren on Good Reads.