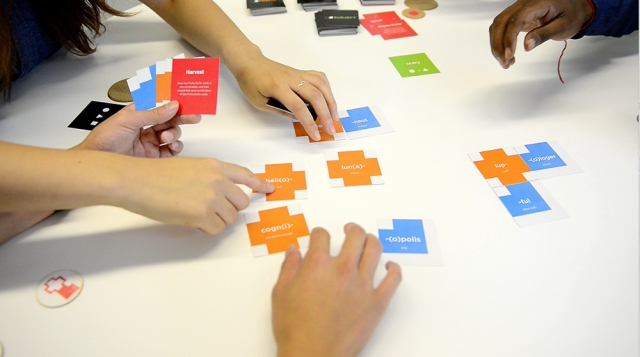 Recent CalArts graduate James Pianka (MFA Critical Studies-IM 14) is taking his Integrated Media project out of the classroom and into the commercial marketplace. The project, a tabletop card game called Roots, has been picked up by Pasadena-based design firm Predicate, which is taking it from concept to a finished product. The game’s Kickstarter campaign raised almost triple the amount of its initial goal by the time its funding period ended.

Roots is a language game in the vein of Apples to Apples and Scrabble. Players form new words by combining prefixes and suffixes and must convince the other players that their invented word is germane to the given subject card. A vote is then taken and the winner of the round gets to keep the subject card. Each player has secret win conditions they must fulfill in order to declare victory.

In an email interview, Pianka talks about the challenge of coming up with a win condition for Roots, one that would take it from a simple writing exercise to friendly competition. “Every mechanic I tried overshadowed the narrative exchange that made the game worth playing,” he says. Playtesting with his colleagues at Predicate finally let him come up with a solution.

Aside from the friendly competition and cerebral fun, Roots is also an educational tool. English as a Second Language (ESL) learners could learn morphology (the study of the parts of words) through the game, and native speakers can gain insight on the language they use everyday.

Pianka is also interested in games’ application to literary art. In an interview with Indie Cardboard, he says that games are the most avant-garde medium for storytelling because they give players choices. “That new variable [choice] changes everything, from the narrative’s structure to the design mentality to the experience of consumption. We’re creating systems for other people to tell their own stories, actually accomplishing non-linearity in a way that prose—however literary or experimental—never quite achieved.”

Roots is available for preorder now and will start shipping in January 2015. Read 24700‘s full email interview with Pianka here and watch the promotional video for the game below.