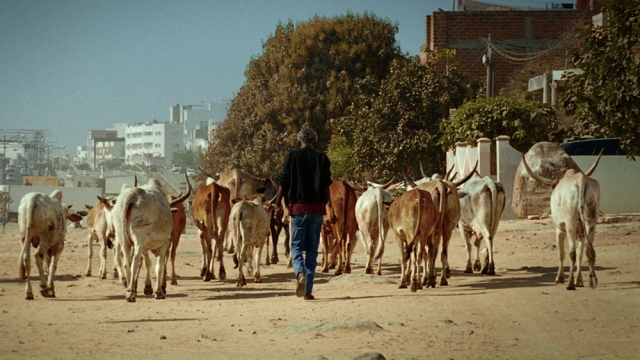 Still from ‘A Thousand Suns (Mille soleils)’ by Mati Diop.

As CalArts welcomes French-Senegalese filmmaker Mati Diop for a three-day residency, the School of Film/Video is presenting two screenings of her work: tonight (Dec. 8) at the Roy and Edna Disney/CalArts Theater (REDCAT) downtown, and tomorrow at the Bijou Auditorium on the Valencia campus.

Diop, the daughter of Paris-based Senegalese musician Wasis Diop and niece of legendary filmmaker Djibril Diop Mambéty, mines the edges between staged drama and creative documentary in her filmmaking. “Her films never announce what parts are fictive or documentary, and reside ambiguously between the two,” notes Film Comment. “In this space, her characters find themselves rooted in one place and dreaming—deliriously, melancholically, and always vividly—of another.”

In an interview with Cinema Scope, Diop states:

I talk about exile, identity and desire like intimate experiences because that’s what they are above all… My characters rarely find themselves where they want to be in the world: there is always somewhere to escape from, to return to or to conquer by means of the imagination.

Mati Diop: The Dawn of a Thousand Suns

In the program The Dawn of a Thousand Suns, REDCAT screens Diop’s latest documentary, A Thousand Suns (Mille soleils) and the short film Atlantiques tonight (Dec. 8).

A Thousand Suns is Diop’s homage to her late uncle Mambéty. Forty years after the release of his cult film Touki Bouki, Diop follows the film’s lead character Magaye Niang as he searches for Myriam, his co-star and great love at the time. Touki Bouki is a film about two lovers scheming to leave Dakar for Paris, only for the man to choose to stay at the last minute. Similarly, Niang failed to follow Myriam to Alaska where she now resides. He has since lived with the consequences of staying, haunted by the life he might have lived abroad.

The ghost story Atlantiques shows Serigne telling friends around a campfire the story of his escape from Dakar to Spain in a pirogue, a small fishing vessel not meant for deep water. Meanwhile, a gravesite shows that he’s already perished in the voyage.

Tomorrow (Dec. 9), Diop presents Big in Vietnam, Snow Canon and an encore of Atlantiques as the featured filmmaker for the School of Film/Video’s Structuring Strategies class.

Big in Vietnam follows Henriette, a French-Vietnamese director as she roams Marseille in search of the missing lead actor in her adaptation of the film Dangerous Liaisons. In a Vietnamese restaurant, she meets a mysterious man who tells her stories of their faraway home.

Diop ends her residency with consultations with film students on Wednesday (Dec. 10).